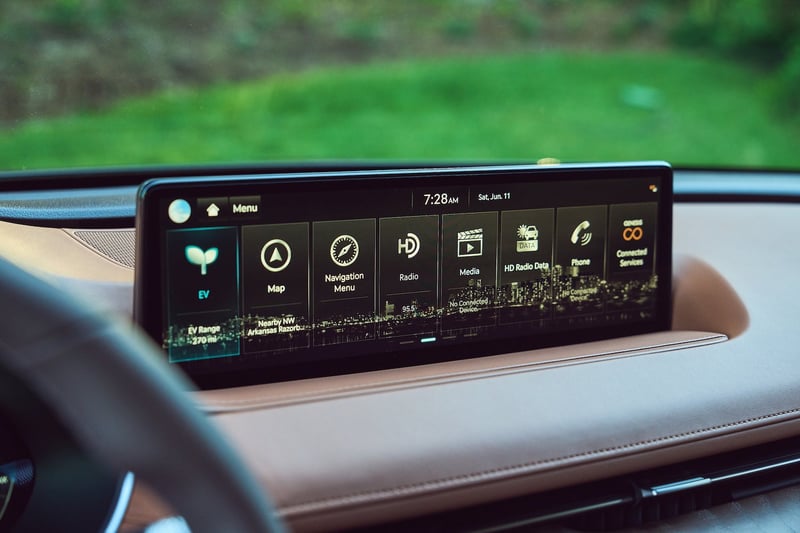 If you're a Genesis or Hyundai owner, chances are you're pretty happy with your vehicle's technology.  The two brands sit atop the J.D. Power 2022 U.S. Tech Experience Index (TXI) Study, as the brands with the fewest owner reported tech issues.  Genesis ranks highest overall.

The TXI study is focused on advanced vehicle technology as it first comes to market. It combines the level of adoption of new technologies for each brand with excellence in execution, and examines how much owners like the technologies and how many problems they experience while using them.

"Genesis is pleased to deliver the latest technologies to our customers with our award-winning lineup of vehicles," said Claudia Marquez, chief operating officer of Genesis Motor North America. "We are glad that the study’s results recognize our commitment to implementing technologies focused on improving our customers’ driving experience."

J.D. Power says of the advanced technologies included in the 2022 TXI Study, 46% of them had at least one problem with a PP100 higher than the most problematic attribute included in the 2022 IQS, with some exceeding it several times over. The lower the PP100 score, the better.

One of the highest performing features in the study? Phone-based digital keys. The most troublesome technology? Fingerprint readers, which rank as the lowest-performing tech, surpassing interior gesture control.

Tech Is Risky, Yet Needed


In releasing the results of its study, J.D. Power calls new-vehicle tech a "double-edged sword",  risky yet needed for future adoption. Researchers say it's a misconception that advanced technologies always lead to significant problems and says it's more concerning that it could  prompt automakers to slow their implementation of new technologies. This strategy could cause them to lose their competitive advantage, as not all encounter significant quality problems when integrating advanced technologies. In fact, researchers say the study findings indicate there can be a large variation in the number of problems encountered for a particular tech, meaning that some automaker executions are much better at meeting user expectations. For example, the rear seat reminder technology has a range of total problems spanning from 1.9 PP100 to 26.2 PP100, demonstrating that the tech can be developed with minimal owner complaints.

Check out the cool technology in the 2023 Genesis GV60 EV:

“Innovation is non-negotiable,” said Kathleen Rizk, senior director of user experience benchmarking and technology at J.D. Power. “The fact that the average PP100 for a technology is high should not discourage automakers from innovating, as there is often a wide range of total problems experienced for a technology across the brands. This means that some are innovating more flawlessly for a particular tech, while others struggle with their execution. Automakers should consider benchmarking brands that innovate well for a technology, which would allow them to identify and then integrate best practices. Effective innovators understand that new technologies can be introduced successfully with proper design and execution.”

J.D. Power also points to the disruption from high-tech entrants such as Tesla and Polestar, saying it further accentuates the necessity for innovation. J.D. Power says its essential because new-vehicle technology is a leading reason to purchase. Technology, when it works correctly,  positively influences an owner’s decision to purchase another vehicle equipped with that same technology.  For example, J.D. Powers says one of the highest execution scores in the study is for the phone-based digital key. It's one of the top three tech features owners say they want on their next vehicle.

“J.D. Power transactional data shows that getting the right mix of technology features owners want is important to perception, profits and sales,” Rizk said. “When owners get the technology features they really want—and which meet their user-experience expectations—the results are positive and those owners tell their friends about the experience.”


Following are key findings of the 2022 study, as outlined in J.D. Power's press release:


The study also analyzes 35 automotive technologies, which are divided into four categories:

Only technologies classified as advanced are award eligible.

The 2022 U.S. Tech Experience Index (TXI) Study is based on responses from 84,165 owners of new 2022 model-year vehicles who were surveyed after 90 days of ownership. The study was fielded from February through May 2022.