If you're like CarPro Show host Jerry Reynolds, you're sad to the current Dodge Challenger and Charger models go as Dodge opens a new chapter in its muscle car history, one of electrification.  So just what does that future look like? Dodge is giving us a good idea with the Dodge Charger Daytona SRT concept.  The automaker calls it a glimpse at the brand’s electric future and says it won't just drive or look like a Dodge, but sound like a Dodge, too.

And yes, Dodge says it will still sound like a muscle car thanks to an industry-first BEV exhaust sound. You'll see subtle nods to Dodge's heritage in the car's design. Aerodynamics are key as well. Inside, a driver-center cabin awaits,  as does a panoramic sunroof and fold-flat rear seats.

“The Dodge Charger Daytona SRT Concept exists because performance made us do it,” said Tim Kuniskis, Dodge brand chief executive officer – Stellantis. “Dodge is about muscle, attitude and performance, and the brand carries that chip on its shoulder and into the BEV segment through a concept loaded with patents, innovations, and pertformance features that embody the electrified muscle of tomorrow. The Charger Daytona SRT Concept can do more than run the car show circuit; it can run a blazing quarter-mile. And when it comes to product cycles, it outruns Darwin. Charger Daytona does more than define where Dodge is headed, it will redefine American muscle in the process."


Dodge chose the Daytona name for the concept on purpose. It's named after the famed Charger Daytona model that was the first vehicle to break 200 mph on a NASCAR track in 1970.


Charger Daytona SRT Concept also introduces an eRupt multi-speed transmission with electro-mechanical shifting. Dodge says it delivers distinctive shift points, which will throw shoulders into seatbacks in true Dodge style.  It's also equipped with a new PowerShot push-to-pass feature. Activated by the push of a button on the steering wheel, PowerShot delivers a jolt of increased horsepower for a quick burst of acceleration.


We mentioned this earlier - yes - the concept has an exhaust sound, the kind a muscle car fans expect.  Dodge says the concept emits a 126 dB roar that equals the SRT Hellcat. It's generated through a new, patent-pending Fratzonic Chambered Exhaust system that sends sound through an amplifier and tuning chamber located at the rear of the vehicle.

The Dodge Charger Daytona SRT Concept - with its long and wide road presence blends the look of a modern BEV with subtle nods to its iconic past.  It also has a new rear hatch design.

A new front end features a patent-pending aerodynamic R-Wing - a throwback to the original Charger Daytona design and to a key figure behind development of the original vehicle. It allows air to flow through the front opening, enhancing downforce. Dodge says the end result is an aerodynamically improved pass-through design. Carbon-fiber intakes tucked into both sides of the front and rear lower fascias provide an air curtain to assist in aerodynamic performance. 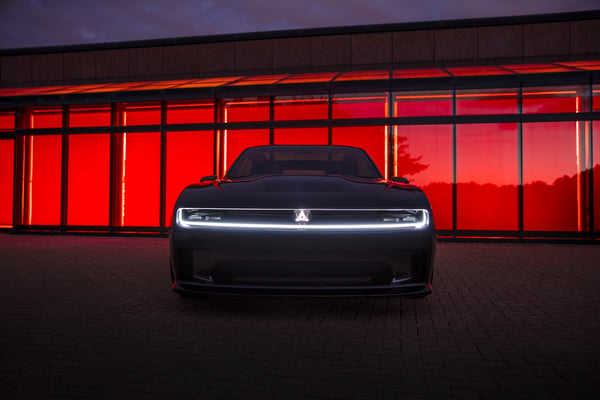 Dodge is also bringing back the Fratzog badge, originally featured on Dodge muscle cars from 1962 through 1976. It's now the new symbol of the brand's electrified future and you'll see the 3D badge on the front grille and tail lamp.  Designers also aded vertical details on the front grille add as a homage to the iconic 1968 Dodge Charger.

The modern cabin features a 12.3-inch center screen, the largest in a Dodge vehicle. It's angled nearly ten degrees towards the driver, and the 16-inch instrument cluster is curved, which Dodge says creates a cocooned, driver-focused feel.  Lightweight, race-inspired seats have an insert that features a pattern of the Fratzog logo.  Other features include a 8-by-3-inch Head-up Display (HUD), a slim, instrument panel and mid-bolster in Ultraviolet color with blue and silver accent stitching feature a “waterline” that extends cross car.

A parametric texture continues the inspiration of the 1968 Charger grille detail on the inside. The parametric pattern spanssrom the IP to door appliques, beneath the console and continuing to the rear armrests and rear console.  Carbon fiber door sills feature illuminated white Daytona lettering, with lighted Daytona lettering also found at the top right of the mid-bezel.

The center console includes a unique jet-fighter-inspired cap that flips up when engaging the start button and a unique pistol-grip shifter design inspired by the past. 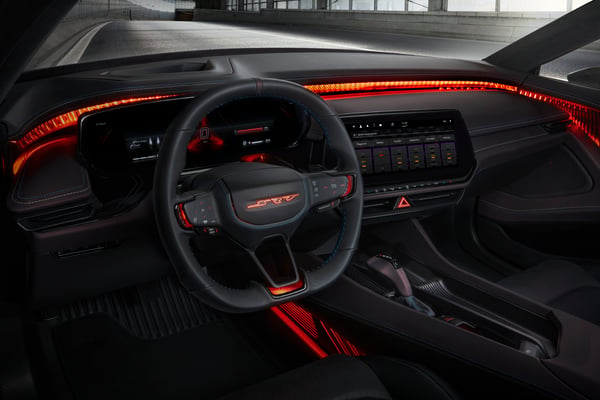 Check out last week's reveal below: