The 2018 Volkswagen Golf GTI Is A Multi-Talented Hot Hatch 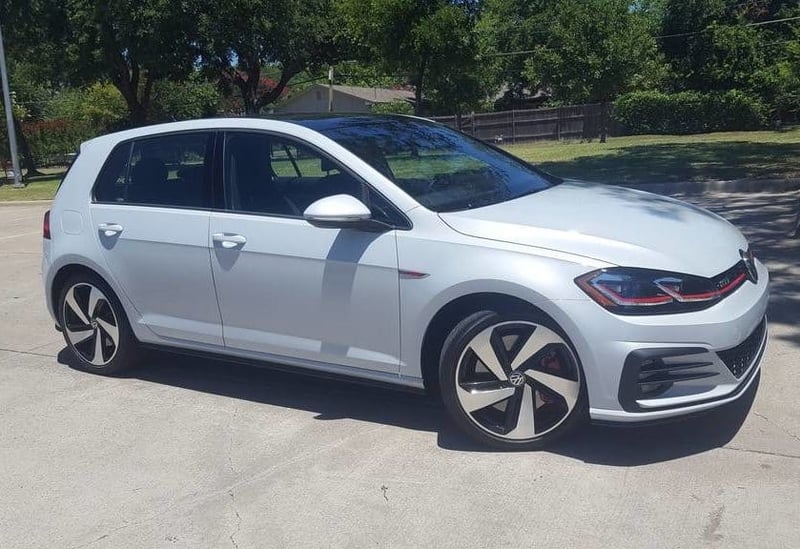 Blink and you might miss the special sparkle of the Volkswagen Golf GTI, a dancer in overalls.

Despite its sterling hot-hatch heritage and golden image with enthusiasts, the feisty GTI prefers whispers in the wind – no stripes, scoops, spoilers or giant badges.

If you overlook its 18-inch wheels and slightly lower stance, the GTI could be yet another buzzy compact commuter-car wrapped in unremarkable.

But I see and hear the GTI clearly, a two-box, four-cylinder terror on twisty roads that can occasionally nip at brother Porsche’s swift heels.

(Truth in advertising: Before I returned to my noisy muscle-car roots in the early ‘90s, I owned a couple of GTIs – or maybe they owned me.)

Though not the fastest or the flashiest, the sporty GTI remains the best overall hot hatch in the segment – as was handily affirmed by the 2018 GTI I had recently.

And it has been the quiet king of the compact-sedan segment for much of the last 30 years, an edgy sophisticate that smoothly blends acceleration, handling and ride.

Although my light-gray SE model elicited few stares or questions in a week of driving, it definitely deserved better -- a claim I have made to no avail for years.

Spare and functional, the GTI introduces itself with a broad modest hood that curved down to a slender horizontal upper grille trimmed in red.

Meanwhile, stylized headlamps with more red trim at their bases curved around to mostly flat sides, aided by short, taut overhangs and an understated character line beneath the door-handles.

Aside from dual three-inch diameter exhausts in back and fine-looking 18-inch alloy wheels wrapped with low-profile 225/45 tires, the GTI could be just another accountant’s express – albeit a fairly attractive one.

But the GTI’s whispers stop when its turbocharged 2-liter engine springs to life with a rich, muffled bark, flexing 220 polished horsepower.

With 258 lb.-ft. of torque at a low, diesel-like 1,500 rpm, the GTI pulled away from stops convincingly, coming on boil at about 3,000 rpm and accelerating to 60 mph in 6 quick seconds, according to Car and Driver.

Moreover, the refined four-banger in my GTI spun a sweet six-speed manual transmission that shifted fluidly and positively.

It made the gearhead in me whirr contentedly.

However, the stout little powertrain in the GTI is only half the story.

Handling has long been a trait of the front-wheel-drive GTI and a few years ago, Volkswagen devised stiff new architecture for most of its vehicles that gives the car crisper responses and a more solid feel.

As a result, the 3,200-pound GTI stepped over bumps firmly with long-legged compliance, staying composed on rough surfaces and turning cleanly into corners with little body lean.

In fact, I would not hesitate to drive one to Big Bend in Extreme West Texas, particularly with its 28-mile-per-gallon overall fuel economy.

Technically, front-wheel-drive cars shouldn’t be this light and athletic on their feet since most of their weight is over the driving wheels, but someone forgot to tell VW.

In addition, the GTI’s quick, light steering bulked up some with speed, feeling wonderfully alive and attuned to the road surface – attributes that make the car seem more upscale than its $32,000 window-sticker suggests.

Like the exterior, the black interior in my GTI felt well-executed yet pretty basic, a nice yang to the sheet-metal’s yin, I suppose.

A flat dashboard in decent plastic, for instance, rolled down onto the glove compartment and around a squarish center-stack that dominated the middle of the dash.

Residing somewhere in there were several safety nannies, including forward-collision warning, a blind-spot monitor and autonomous emergency-braking.

Meanwhile, VW provided knobs for the audio and climate-control systems, located beneath an 8-inch display screen on the stack.

The highlights of the interior, though, were a slick flat-bottom steering wheel and smooth black-leather seats with red stitching on their sports bolsters.

And incidentally, leg- and head-room in back were ample thanks to that efficient two-box exterior.

My well-equipped GTI had one option – a $695 leather package.

In many ways, the GTI can be viewed as a sort-of muscle-car for millennials, a quick, thoroughly developed and fairly green sedan for young buyers.

But I’ve got to admit: The GTI is so complete and organic as a sports sedan I might someday consider trading my V-8 thunder for a well-huffed VW four-banger.

Just don’t tell any of my old hot-rod friends.

Click Here to Find A Car Pro Certified Dealer Near You 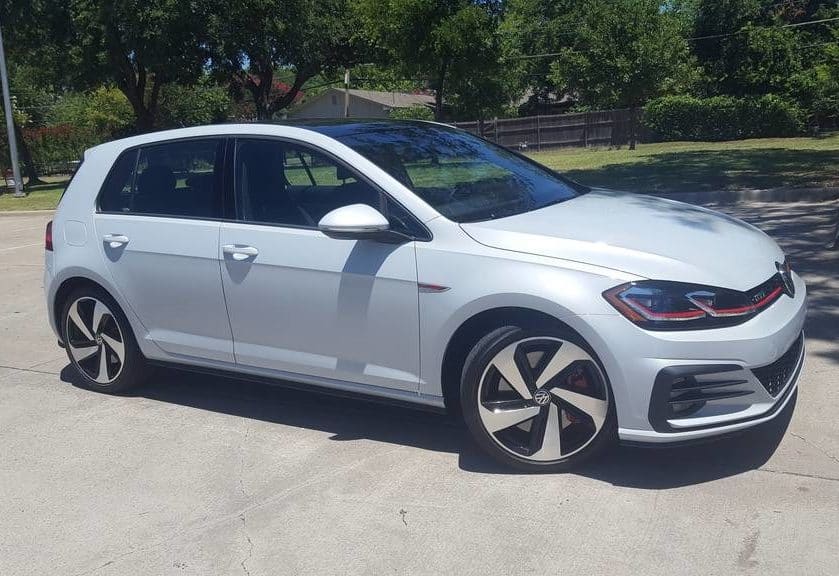 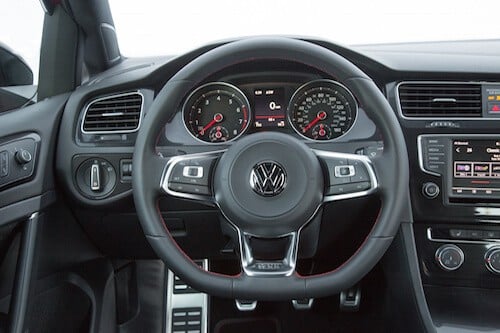 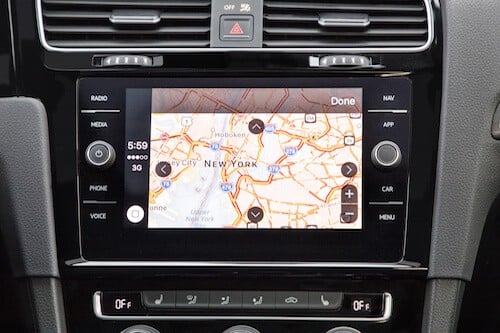 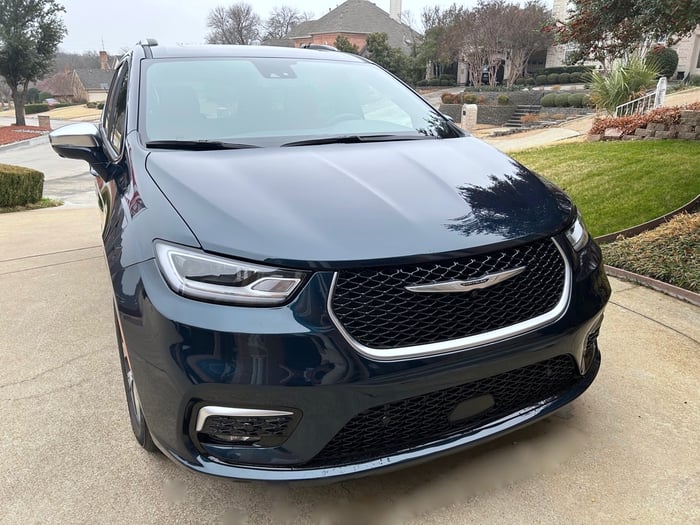 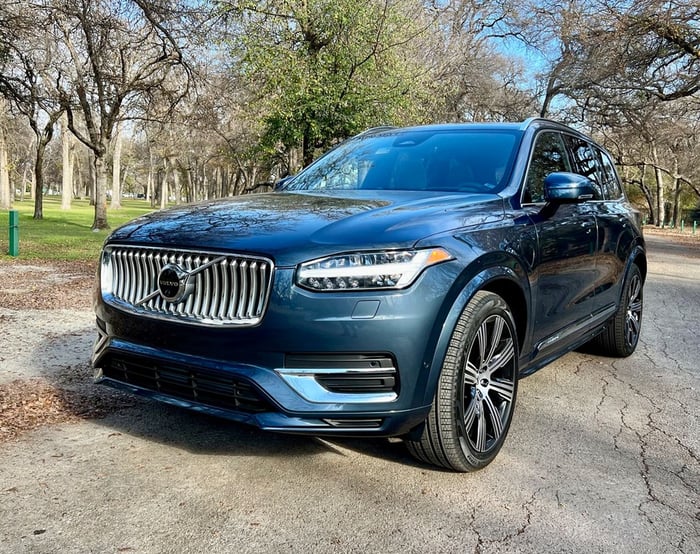