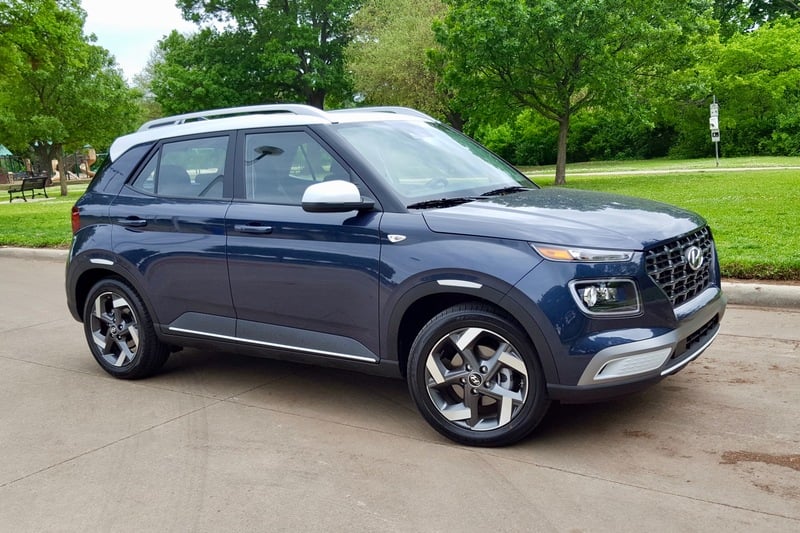 Don’t be too dismissive about the tiny new Hyundai Venue, a comma of sorts in a world of meaty adverbs.

Sure, it’s a dinky subcompact, a stubby little box surrounded by big trucks, SUVs and crossovers.

But before you pronounce the Venue as simply too small – a crossover for kids -- climb inside and stretch out.

The 2021 Venue Denim Edition piqued my attention last week with the best, most complete interior I’ve seen in a mainstream subcompact crossover costing less than $24,000.

I wondered what other surprises I might encounter in Hyundai’s smallest crossover, one of seven SUV-like vehicles that the ambitious automaker now builds.

Though it contains plenty of the cost-compromises you find in subcompacts, the Venue -- in its second year of production -- doesn’t look or feel like a budget special aimed solely at young buyers.

As a Denim Edition model, the stylishly chunky Venue I had last week was navy blue with a white top and several bits of unusual white plastic trim.

How about small pieces of white plastic rectangles on each wheel-opening? Yeah, I never quite figured that one out, either.

However, I did like the vehicle’s relatively large grille in black and silver strands flanked by high-mounted slits for headlamps. 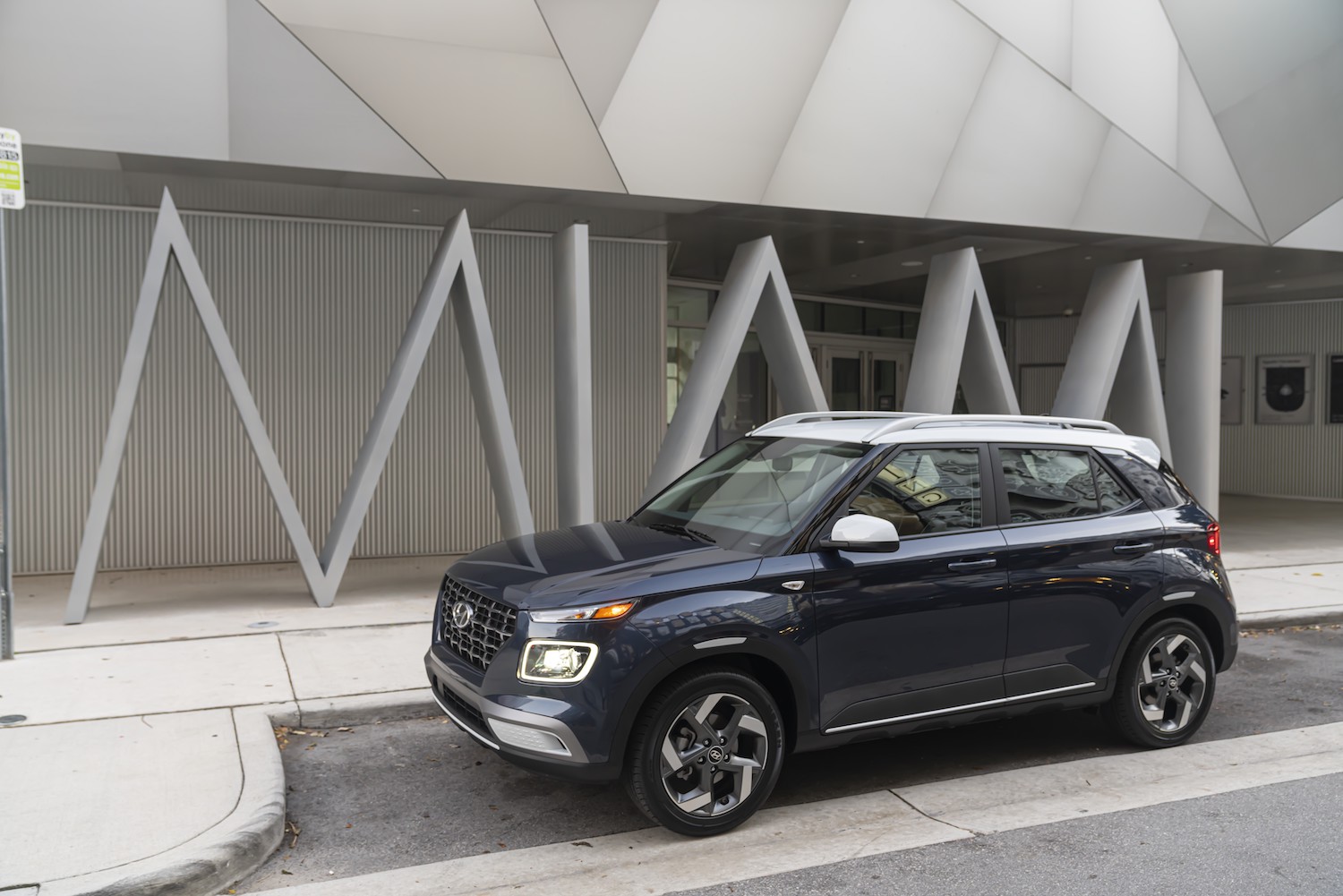 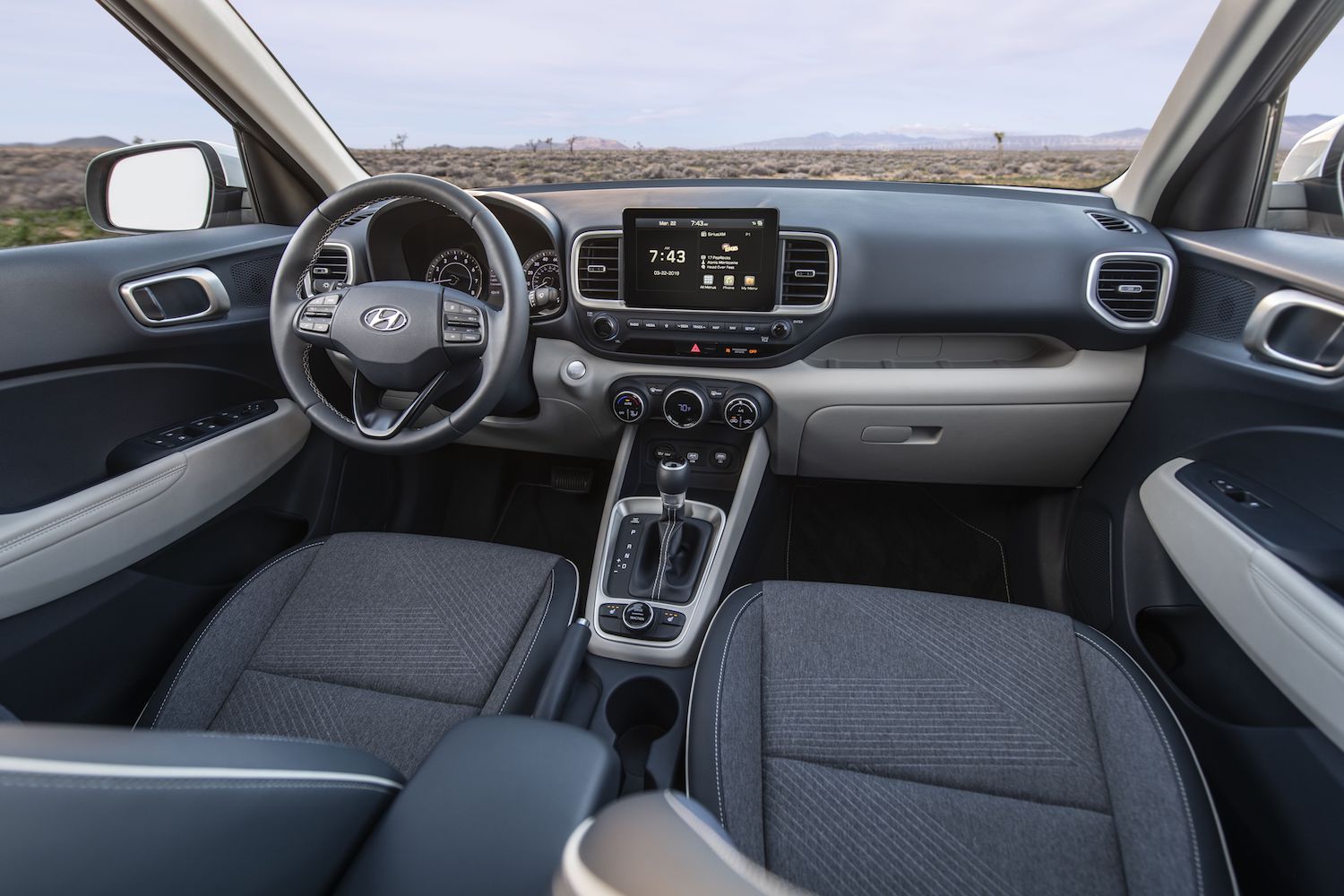 With really short overhangs in front and back, the Venue could push its wheels to the corners of its body, giving it a longer wheelbase and somewhat better ride.

Its sides were mostly flat with muscular curves in them and prominent character lines above the door-handles.

Rolling on subcompact-meaty 205/55 tires on 17-inch wheels in silver and gray, the front-wheel-drive Venue had more presence than expected – albeit still on a small scale.

That was the good news. Like most subcompacts, the Venue relies on a small engine to propel it – a 1.6-liter four-cylinder motor with 121-horsepower for its 2,600 pounds.

That’s asking a lot. Typically, any engine that has to move more than 20 pounds per horsepower will be hard-pressed to impress – and the Venue is about 21.5.

Bolted to a continuously variable transmission (CVT), the little engine felt adequate initially, jumping away from stops with some energy and pulling pretty smoothly to about 40 mph.

From 40 on, though, its spark faded pretty quickly, leaving the engine to drone and the CVT to moan and bray.

Just emphasize to your friends that the Venue also gets 31 miles per gallon in overall fuel economy – and will still get to 60 in 8.5 seconds, which while slower than many pickup trucks, is still capable of merging with traffic.

The vehicle’s handling and suspension are also a mixed bag. It rides pretty nicely, well-controlled but with a bit of bounce on bad pavement.

It also is agile, darting around easily in traffic, but the Venue lacks the stuff to be as sporty and sure-footed as an entry-level Honda Civic.

Moreover, its steering was really numb and wooden, providing no feel for road surfaces.

I wasn’t particularly surprised that a relatively inexpensive subcompact was not exactly high in the smiles per gallon quotient.

Mainly, I was disappointed that the engine fell short of the Venue’s styling, its solid architecture and way-above average interior. 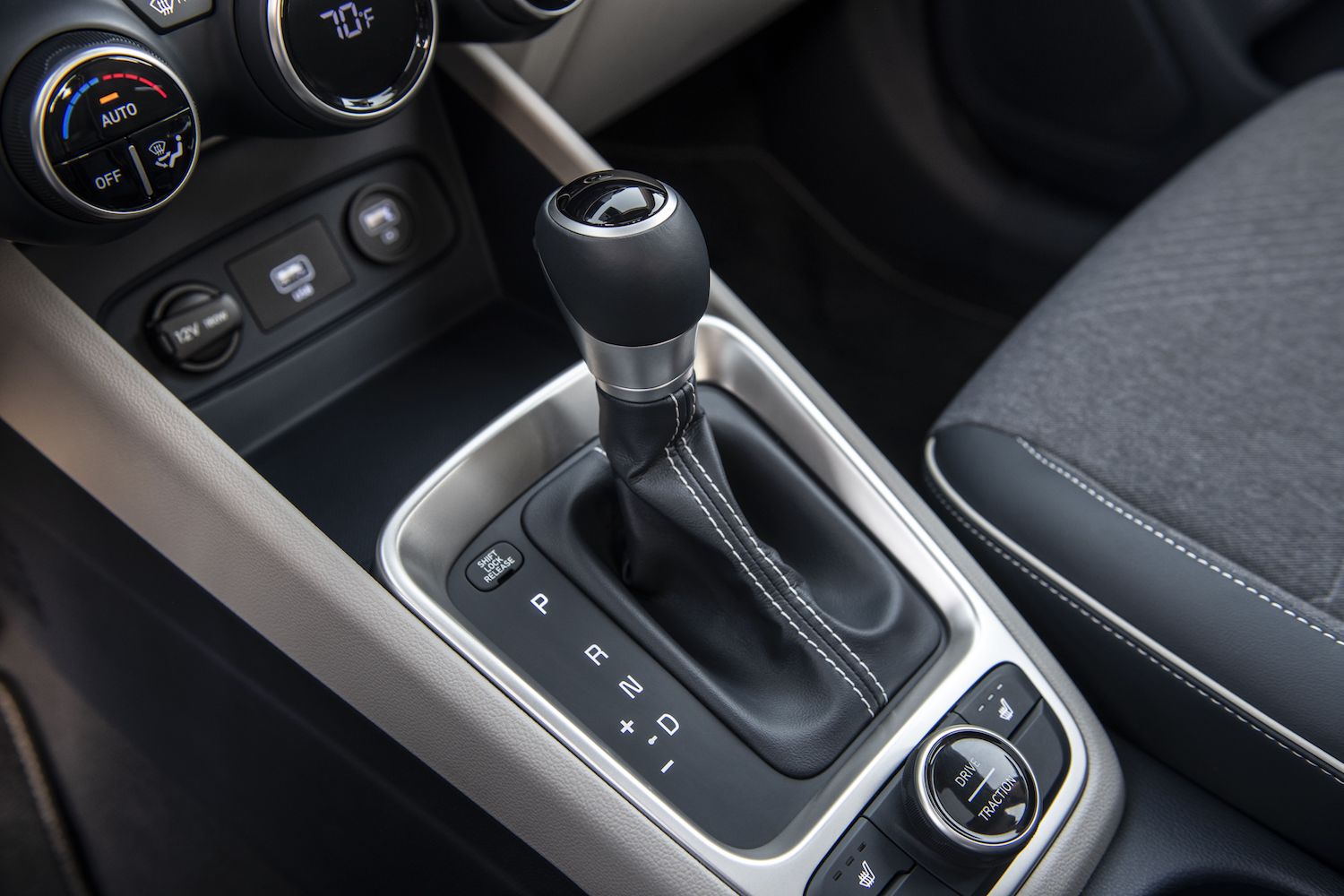 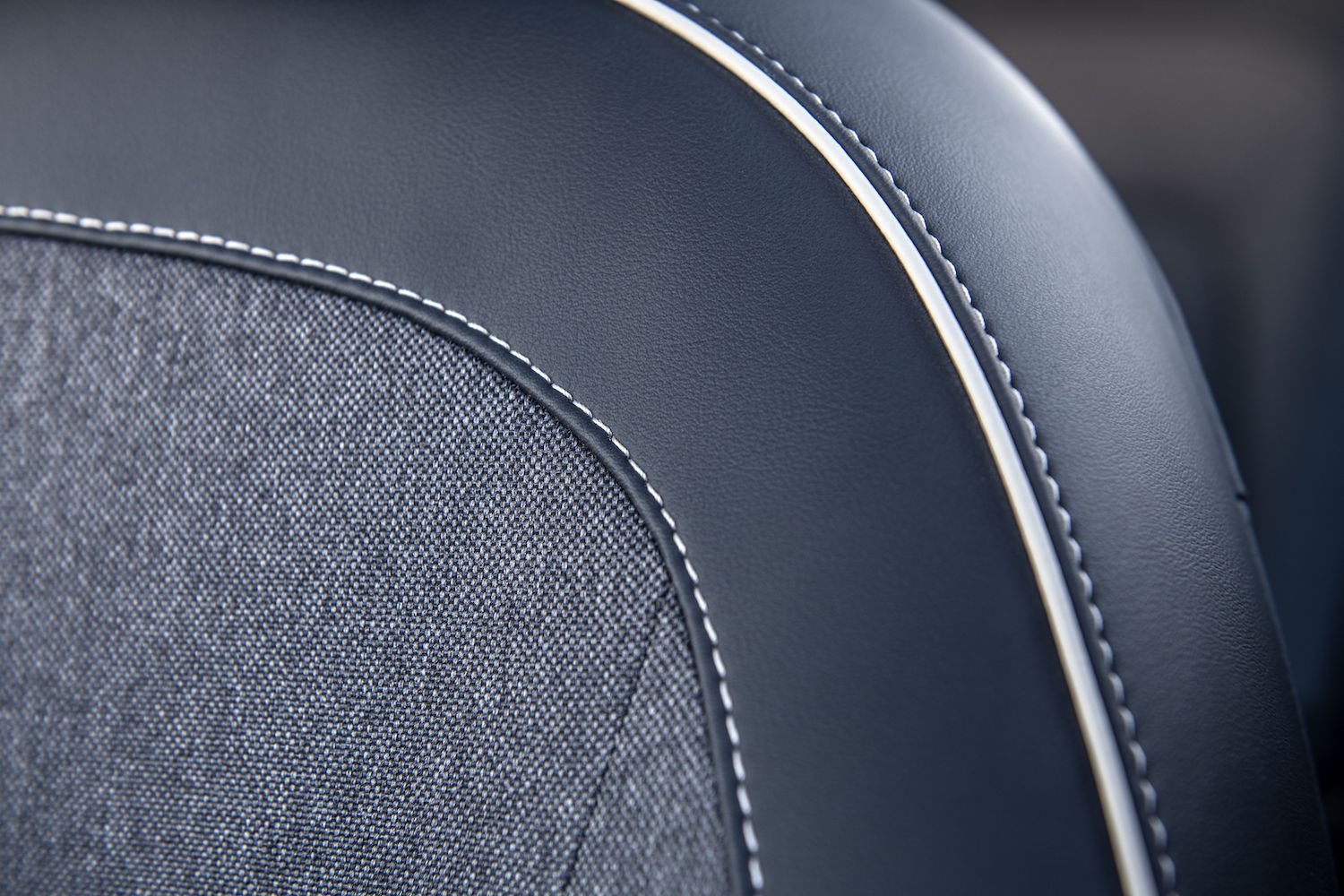 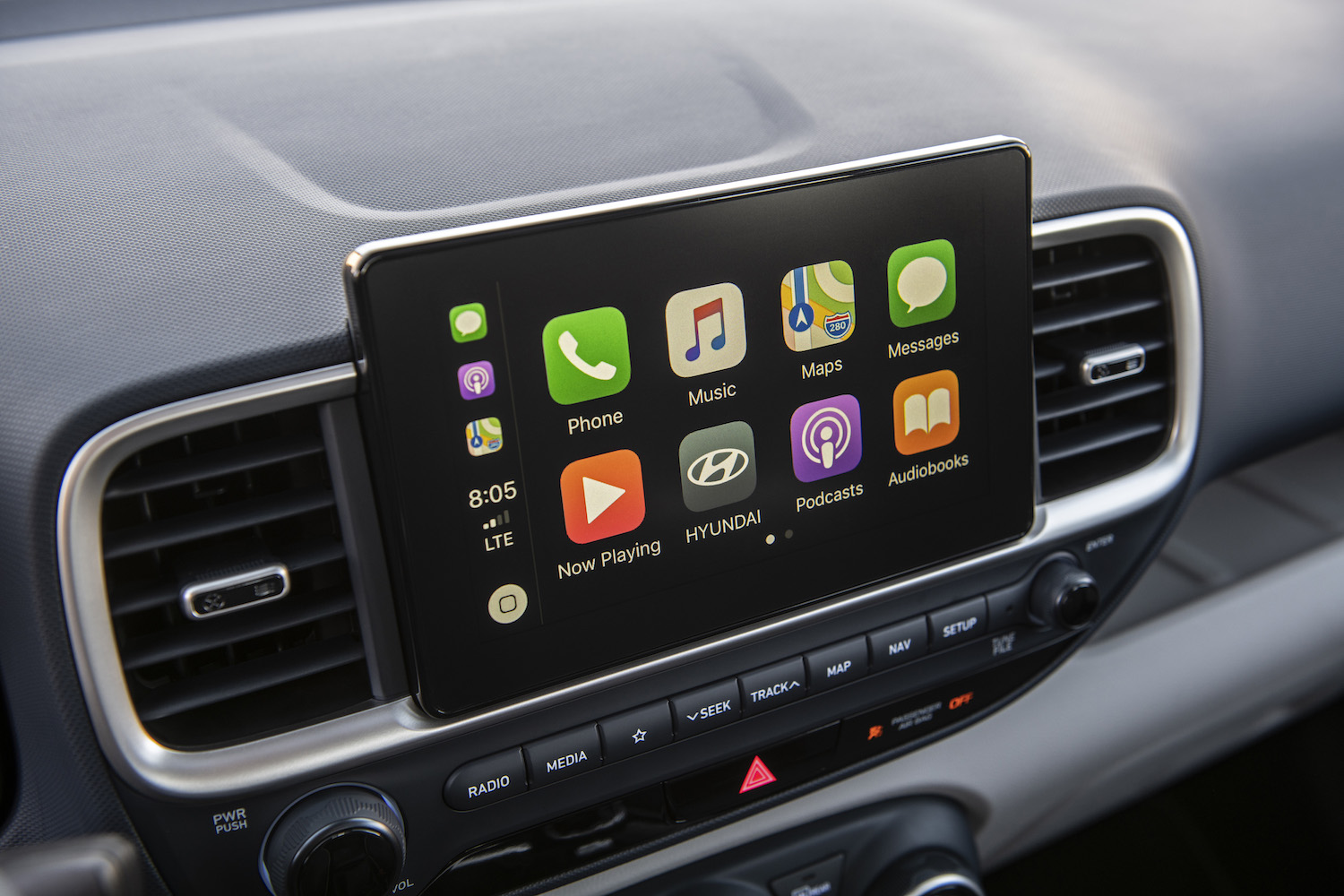 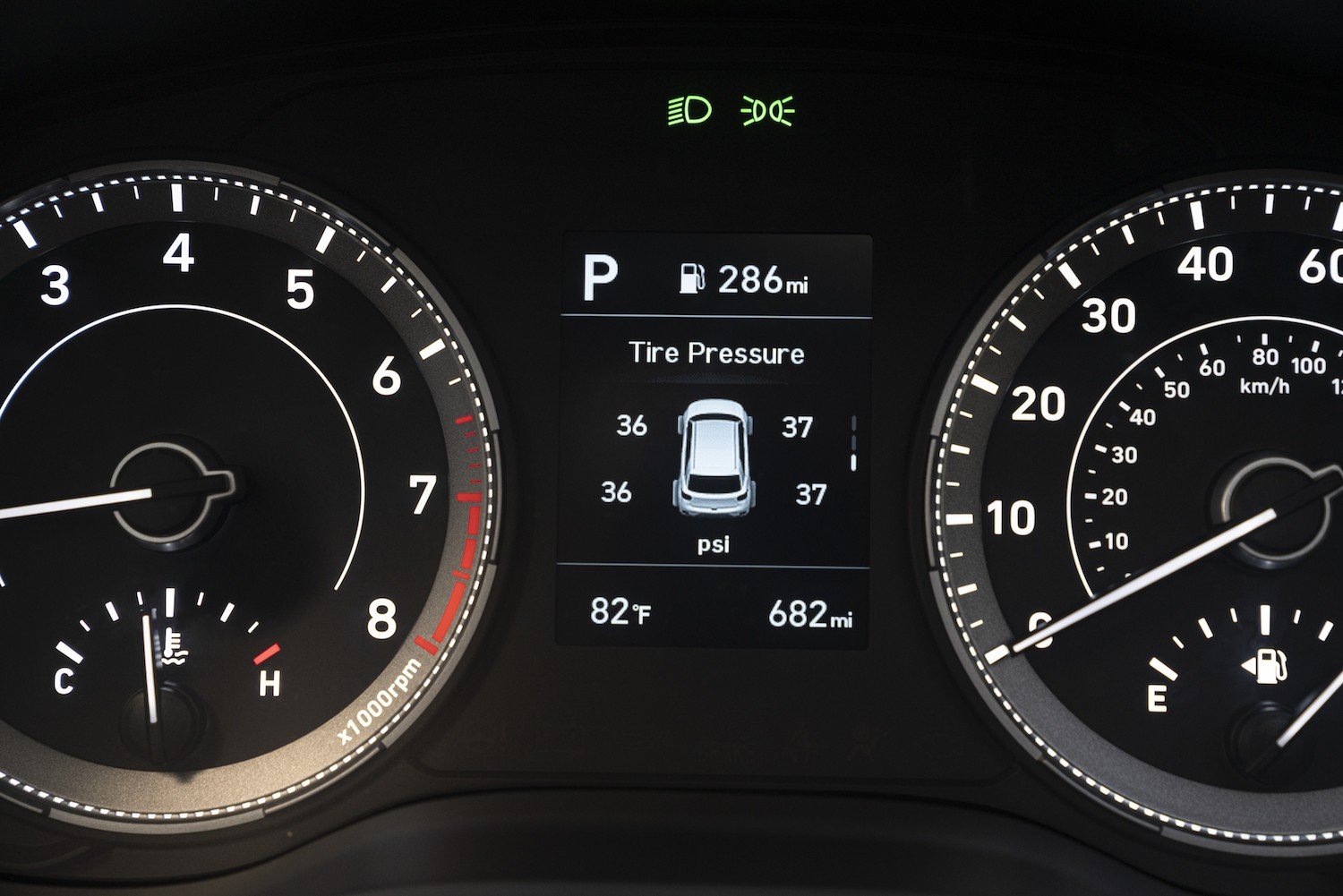 That interior, like the exterior, was all blue-and-white in my Denim model – a feature I rarely see in anything costing less than $50,000.

A gracefully curved blue upper dashboard, for example, flowed down to a mid-dash mostly occupied by an 8-inch touchscreen with good graphics and knobs for the audio and climate systems.

The lower dashboard, meanwhile, was formed in off-white plastic and eased into the rails of the console, while dark-blue door panels featured off-white armrests.

It was all way more than I had expected inside and pretty darned impressive outside.

In fact, hard-charging Hyundai came close to delivering a special subcompact crossover with the 2021 Venue.

Sooner or later – and I would bet sooner – Hyundai will complete the job, particularly if the subcompact crossover market persists in the U.S, and if I ran Honda or Nissan or even Toyota, I might be very concerned about that possibility. 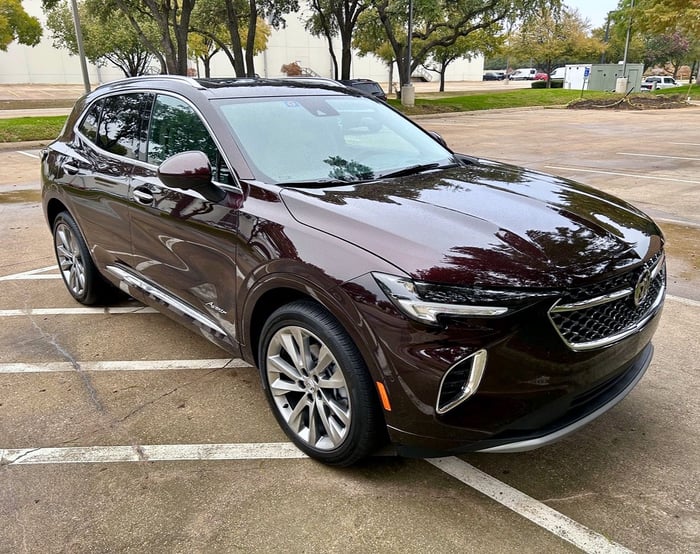 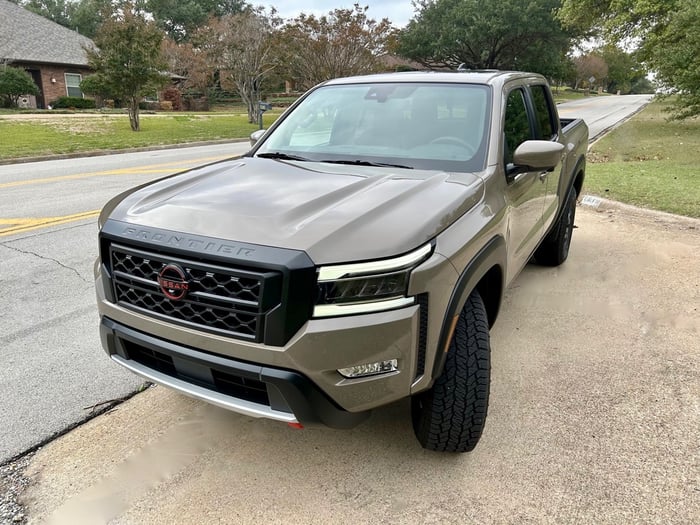