True Stories From A Former Car Dealer #40: The Final Curtain 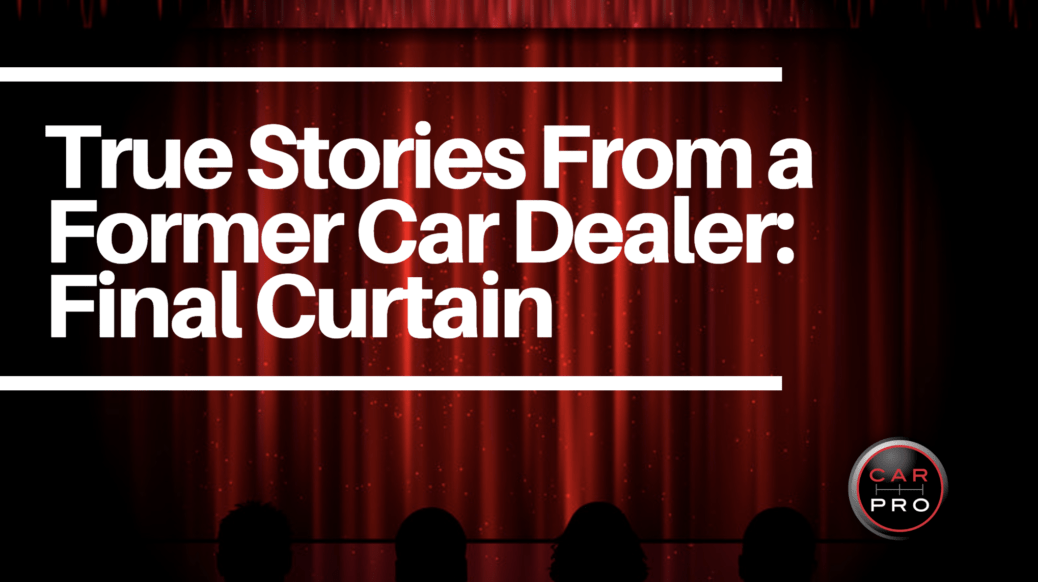 The first True Story in my series was called the Lottery Winner and went online at our website on January 22, 2018. It was the story of a man with a million dollar scratch off lottery ticket, but more about good that comes from treating people the right way.

The reaction I got to the story was incredible from listeners and subscribers. I figured I might be able to stretch the series to eight, maybe ten if I racked my brain hard enough.

Writing these has been good for me, and I hope enjoyable for you. Some of the stories came easily. The first four are etched in my brain forever, I remembered every detail, in spite of some of them going back 40 years.

I wrote two stories, #5 and #35 that I think consciously or unconsciously, I blocked many of the details out. Having Dateline NBC (#5) breathing down my neck cost me many nights of sleep, but not as many as #35 about a battle with the Texas Attorney General. I almost did not write that story, it was too painful. With both these stories, I had to rely on Google to help me with the details.

#23 and #32 detailed the loss of two dear friends, and if the circumstances had been different, I might not be here today.

Many of the stories I wrote were memories from my days as the Ford National Dealer Council Chairman. Of those, #30 was probably the most gratifying as our Council created something everybody said was impossible.

One last event that I had forgotten about (or blocked out) occurred in 1974. I was a junior in high school working afternoons and Saturdays. When I got to work, it was a Wednesday and coming off the convoy truck in the back of the dealership was the first 1974 Mustang II Cobra that we received.

It was black with gold stripes that ran from front to back and down the sides, and it had T-Tops. At that moment, I thought it was the prettiest Ford I'd ever seen.

Typically, I would have taken it straight to the make ready department for prepping and display on the showroom floor. However, the back gate of the dealership was open while the convoy driver off-loaded other vehicles, and I thought "why not take it for a little spin?" The car sounded great, and when I got out of earshot of the dealership, I stomped on it. It was a rush.

I was less than a mile from the dealership and decided to head back before I got caught. I came up to a stop sign needing to cross a normally busy street. I looked to the right and all was clear, I looked to the left and was looking directly into the sun.

I didn't see a car in sight and proceeded out to cross the street when I heard the crash. It all happened so fast at first, and then in slow motion, I saw a VW Beetle flipping in the air, incredibly high off the ground, and it came to rest right side up. Like it was yesterday, I remember all four wheels of the VW flying off the car.

Stunned, I remember smoke coming from the radiator and the smell of anti-freeze. The VW had come right across the front end of the Mustang, just to the rear of the front bumper. I assume the driver jerked left at the last moment causing the flipping.

The VW was a good ways from the Mustang and I ran to see if the driver was OK. Quickly a crowd gathered and I heard the sounds of sirens. The driver appeared OK, shaken of course, but no visible signs of injury.

I walked back toward the Mustang and a field of debris was scattered everywhere. The police, fire, and paramedics got there. They transported the VW driver just to check him out, but I refused. I was shaken, but not hurt. The police officer was talking to me for his report, and I told him the truth, I flat didn't see the VW. He charged me with the accident and cited me for failure to yield right-of-way, no inspection sticker, and no license plate of any kind.

Then I saw the owner of the dealership pull up and get out of his car. He was the last person on earth I wanted to see right then. He looked at the Cobra, expressionless, and just turned and got back into his car. I have no idea who told him about the wreck, but he was going to find out somehow.

I watched as a wrecker picked up the Mustang and swept up the pieces lying all over the ground. I went home once the police were finished, and I truly don't remember how I got there. I did not walk, it was a long way home, but someone had to drive me, I just don't know who.

I had church choir practice that night, but was too upset to go. My Mom gave me half a tranquilizer to calm me down and I went to bed.

The following day, I went to school, and then headed to the dealership. I had things in my locker that needed to be cleaned out, and I wanted to say goodbye to everyone before I got fired. My plan was to work for free as long as it took to pay back the insurance deductible on the Cobra, if they would allow it. At the $2 per hour I made at the time, it would take a good while.

I had no sooner gotten to the dealership when the owner paged me to his office. I had a pit in my stomach and was shaking. I sat down in front of his large desk and he said (I remember the exact words) '"you know what you did was wrong."

I couldn't get any words to come out. With tears rolling down my cheeks, I just shook my head. He kept the lecture short, and finally asked if I had anything to say.

I told him I was sorry, and told him I would pay the insurance deductible. I then said: "I assume I am fired, but just wanted to tell you how much I enjoyed working here."

The man had a little smile come across his face. I knew he'd always liked me, and the worst part for me was betraying his trust.

He said: "you are not fired, but nothing like this can ever happen again." I was stunned and elated, all at the same time. I thanked him profusely, shook his hand, and started to leave his office.

When I got to the door, he said "hey." I turned around, he gave me wink, and said: "Just so you know, I did the exact same thing when I was your age, except it was a customers Shelby. Now get to work."

I hope you have enjoyed this series. While it is over for now, should I remember more stories I think you might find interesting, I will add them to the newsletter and to the page we have created to archive the True Stories series:

I leave you with gratitude for taking the time to read these stories, for all the comments and feedback you have given me, and I part with words that describe many of the stories I wrote: And words from the most heartfelt story I have written, #39 titled Regrets.

And now, the end is near, and so I face the final curtain.
My friend, I'll say it clear, I'll state my case, of which I'm certain.

I've lived a life that's full, I've traveled each and every highway
And more, much more than this, I did it my way.

Regrets, I've had a few, but then again, too few to mention.
I did what I had to do, and saw it through without exemption.

I planned each charted course, each careful step along the byway.
And more, much more than this, I did it my way

For what is man, what has he got? If not himself, then he has naught. To say the things he truly feels, and not the words of one who kneels.

The record shows I took the blows, and did it my way.