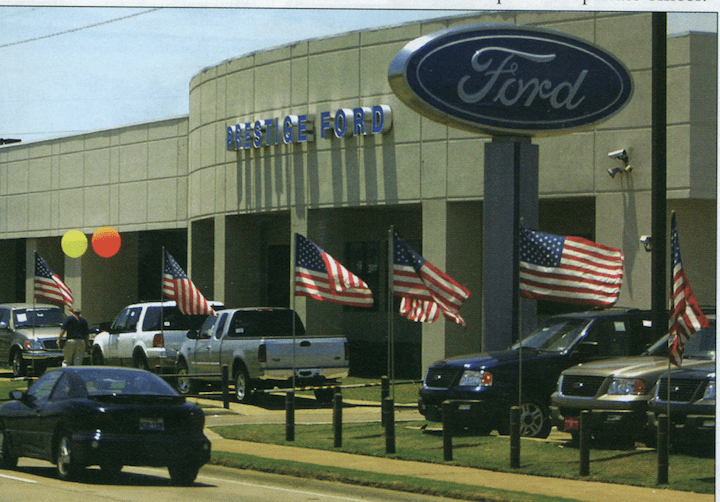 As the Car Pro Show is a direct extension of me, my personality, and my heart and passions, I always felt like my dealerships should be an extension of me as well. If they weren’t, they would be just another dealership with glass and brick and lots of shiny cars. That just didn’t seem right to me.

I always considered myself to be extremely patriotic. I am not 100% sure what influenced that, perhaps the fact that my Father was a World War II veteran. Regular listeners to the show often hear me praise our troops, our veterans, and our first responders.

My patriotism went to another level after 9/11/2001. In the days and weeks after that horrific event, I was deeply moved by the show of flags everywhere. People flew flags in the back of their pickups; they popped up at homes that didn’t typically fly them, they were everywhere you looked. In fact, it was weeks before you could even buy a flag anywhere.

As someone who has always enjoyed writing, I began writing about September 11 and shared the writings with my employees and some associates. Someone, I don’t recall who, suggested the articles be shared with everyone. I did not want it to appear that I was promoting my dealership, so I thought long and hard about it.

I fully reasoned that if I took the lead, maybe some other businesses would step out too. I began running full-page color ads in the Dallas Morning News every Friday in the Metro section, to distance these ads from the automotive classified section. The response was immediate. People called, they wrote, they emailed, they brought me presents. The ads were extremely effective, but by the reaction, it was well worth it. I was making people think. 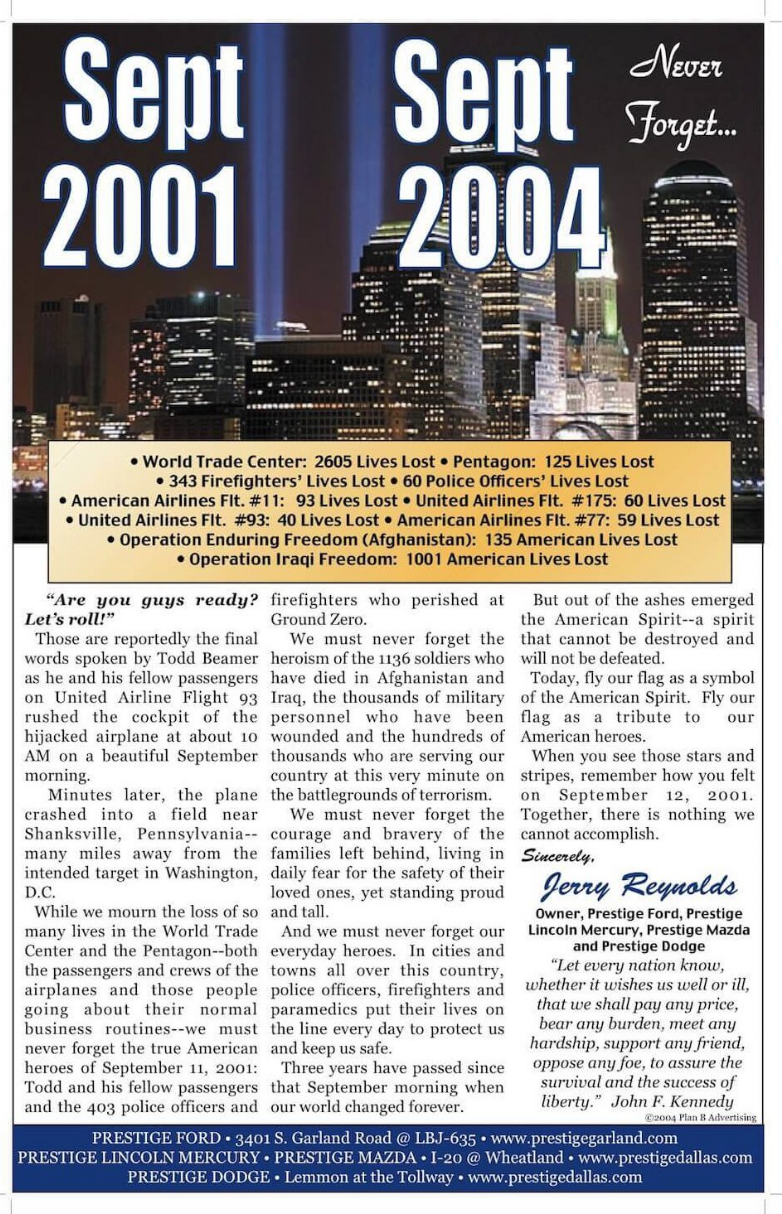 The ads continued for weeks, and I started to trail them off when I had said all I felt I needed to say. I wish I had kept the ads, but I did not, however, I found a few that you will see here. I did continue to commemorate the anniversary of 9/11 with ads and writings for a number of years. One, in particular, was titled How Soon We Forget. It talked about how a few years after 9/11 the American flags were gone and we, as a nation, had gotten complacent way too soon.

On the first anniversary of 9/11, I was asked to speak at a memorial at the main fire station in my hometown, Garland, TX. There was a sea of white crosses in a field, as a remembrance to all the first responders who died in New York. It was a somber event that started at the moment the first plane hit the World Trade Center.

While at the event, the Fire Chief told me he wanted me to see something. He showed me a statue of a New York firefighter in full uniform, head bowed, clutching an American flag. Turns out, the Garland firefighter’s family did statues for a living. I took one look at it and said: “I’ve got to have this.” The firefighter who made it was there, and I asked if it were for sale. He said he could make me one just like it, but I really wanted that one, it was perfect.

He said OK, he’d make another one for the fire station and I asked how much it was for his time and labor. He said it was $8000. I admit that took me aback a little, but the detail was incredible. I said OK quickly. It must have weighed close to 500 pounds, but I got it and proudly displayed it on the lawn of my dealership at the main entrance so that everyone who came to the dealership walked past it. For years, on the 9/11 anniversary, all my people gathered around the statue as I led them in prayer and the Pledge of Allegiance. 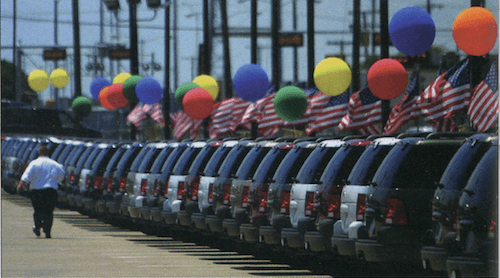 I surrounded my dealership in American flags. I had pole holders installed on the railings that went all around the dealership, so every five feet there was an American flag standing tall, waving in the wind. It was expensive since they had to be changed twice a year, but it was a sight to see. Every vehicle on the lot had a front license plate with the American flag on it.

No doubt my proudest moment came in the summer of 2003. I got an envelope postmarked from Baghdad. I had no idea what was inside, but it was a heartfelt letter from one of our U.S. troops on the ground. Someone in his family had sent him one of my full-page ads. It clearly touched him.

Ward’s Dealer magazine, a major auto industry publication got wind of the letter, and did a story on it:

Jerry Reynolds, owner of Prestige Ford in Garland, TX, is as patriotic as they come. So when U. S. forces went to Iraq, he took out full-page newspaper ads in the form of personal letters voicing his sentiments and hopes for their safe return.

An Air Force captain, a B-52 radar navigator flying bombing missions over Baghdad, came across one of the letters. Moved, he mailed a letter to Reynolds, saying: “knowing there are people like you out there makes climbing into that old airplane just a little easier.”

He also wrote something else. On a 2,000-pound bomb, he penned, “To Saddam and Friends. Compliments of Jerry Reynolds, Prestige Ford, Garland, TX.” The airman’s B-52 dropped the bomb on Baghdad.

“I hope it’s the one that got him,” the captain says of the dictator.

When the bomb was released, there was a firing pin that was pulled and stayed attached to the airplane. When they landed, the captain grabbed the pin and enclosed it in the letter.


When I sold the dealership, as you always have to do, you have an outside company inventory every asset you have, right down to the calculators and paper clips. This is when you have to declare any items that are not included in the sale. Typically, it is personal items, pictures, perhaps your desk. I excluded the firefighter statue and gave it to my son, who always loved it and admired it. He also inherited my pride in America and was a huge patriot. At the time of his passing in 2013, he proudly displayed that statue in the front yard of his home, or on the balcony of his apartment. It still resides at his Mother’s home. 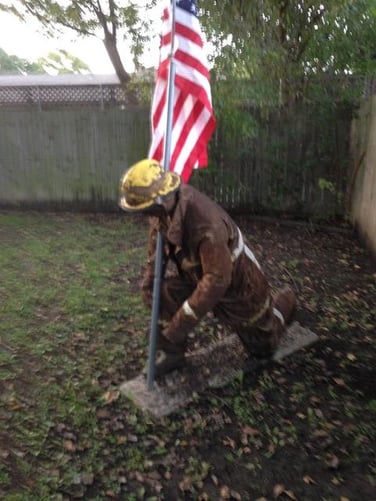 As for the firing pin from the Air Force captain, I carried it on my key ring until recently, and it had started to show some wear and I was afraid I would lose it, so I have it safely tucked away in a drawer.

On a personal basis, I have a 25-foot flagpole in the front yard of my home, proudly flying Old Glory and I am a stickler for making sure it is at half-staff and back at full-staff as directed by the President of the United States.

Finally, we pay homage to 9/11 every year on the Car Pro Show by recounting the minutes before the tragedy occurred. We recorded something early on, then did a large tribute for the 10th anniversary. We will do another one on the 20th anniversary.

If you’ve never heard it, you can do so by clicking the video below.  I also recounted that fateful day in True Story #11.

WardsAuto 2002 Dealer of The Year Issue 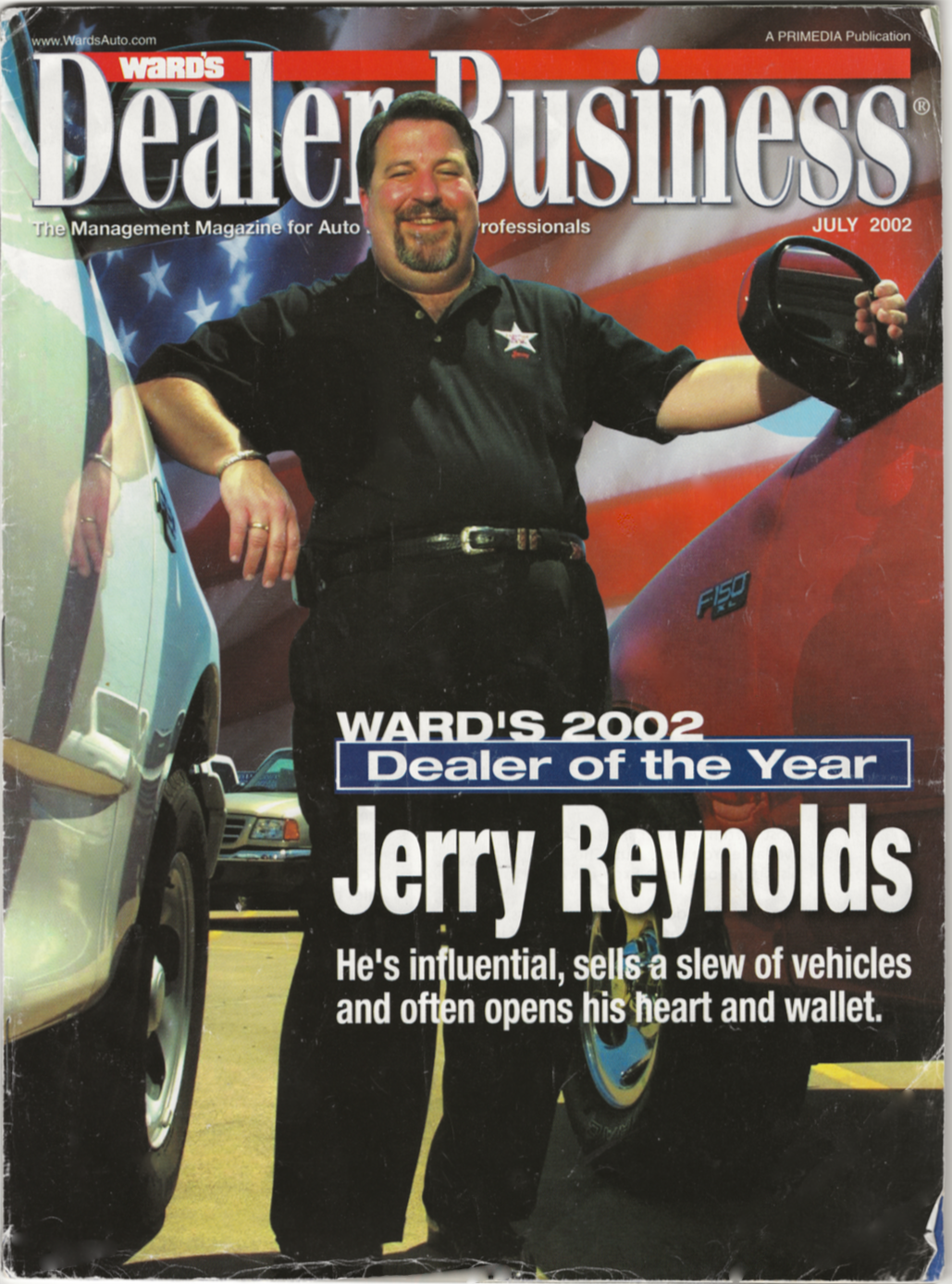 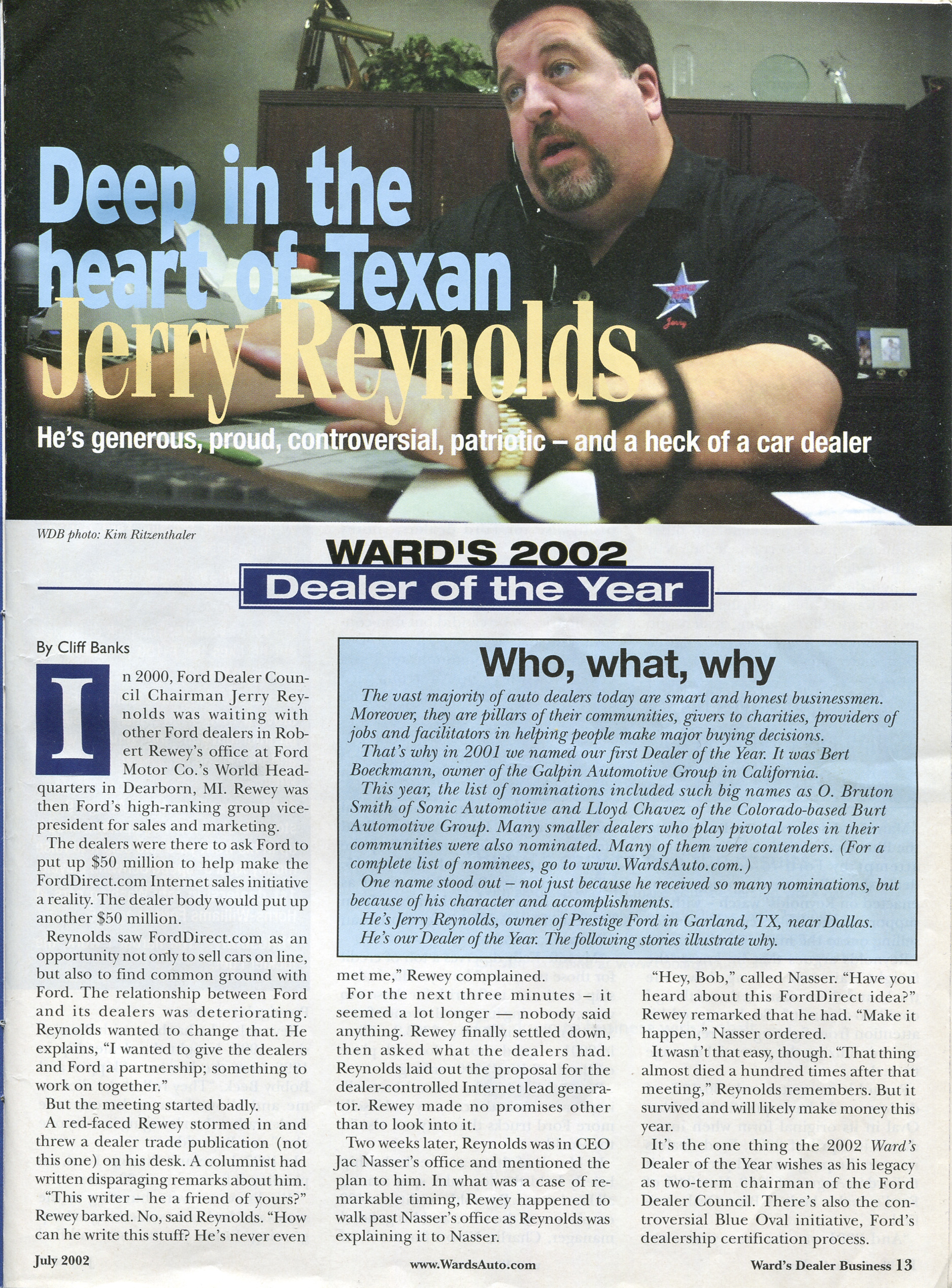 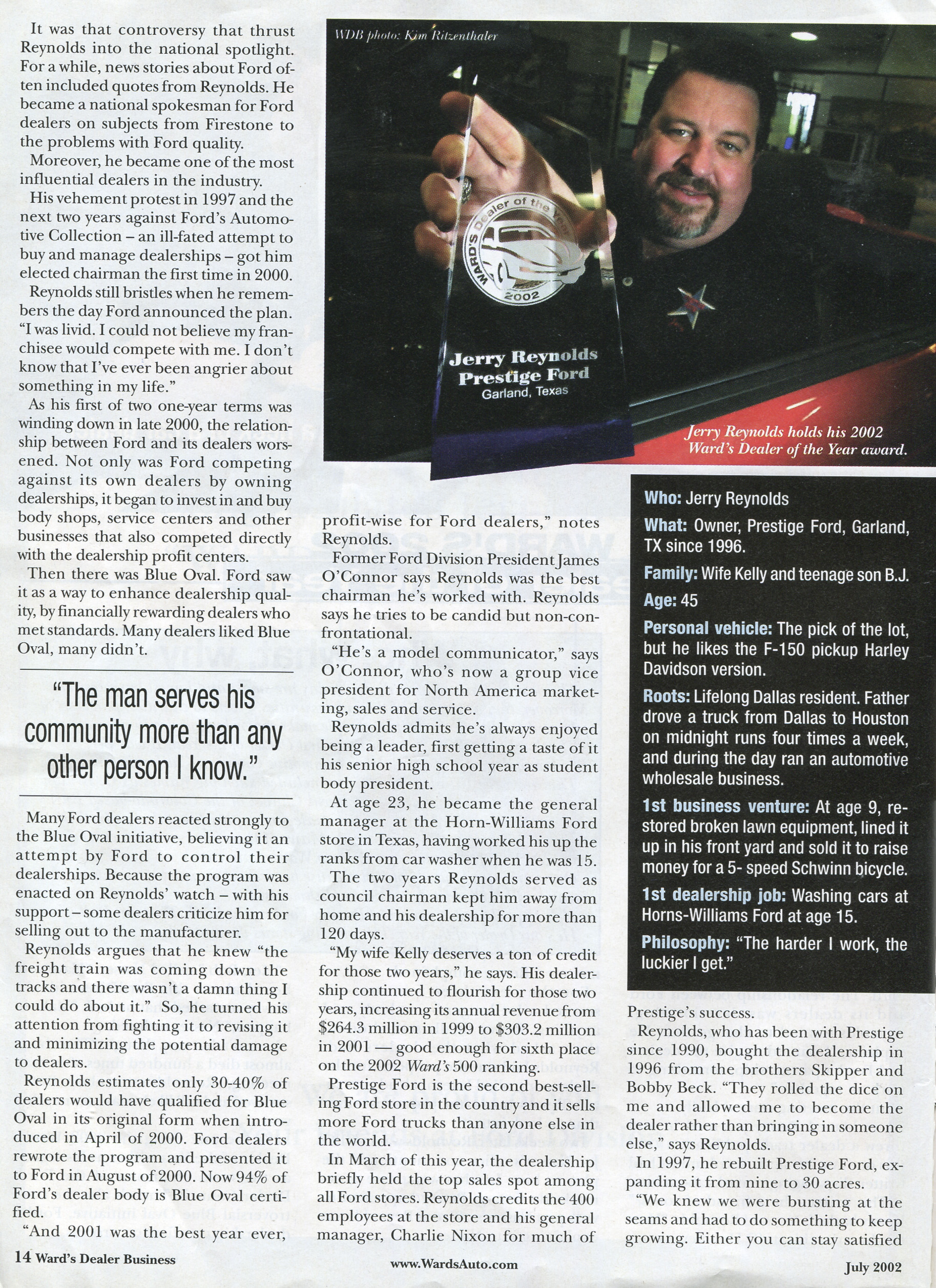 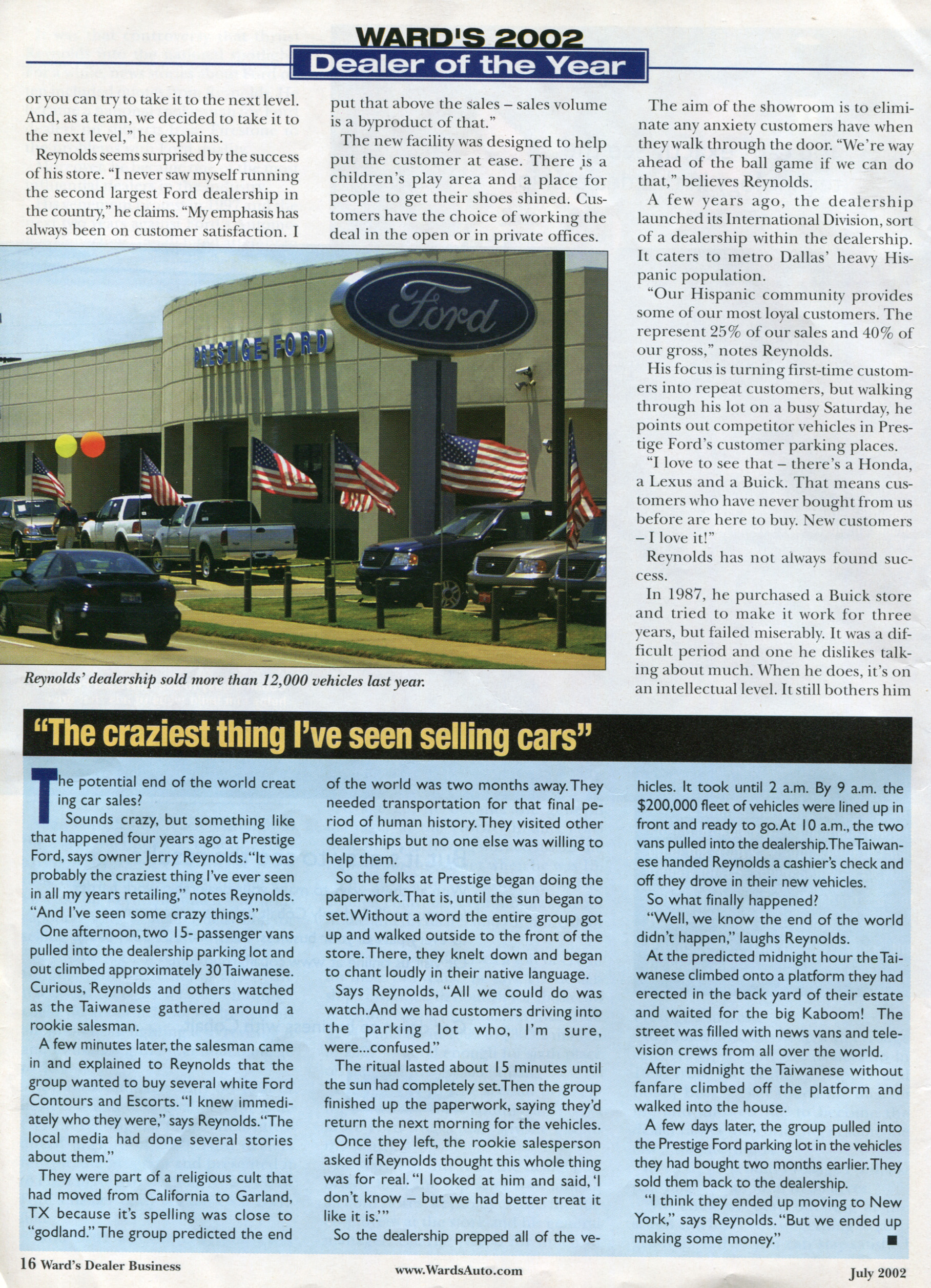 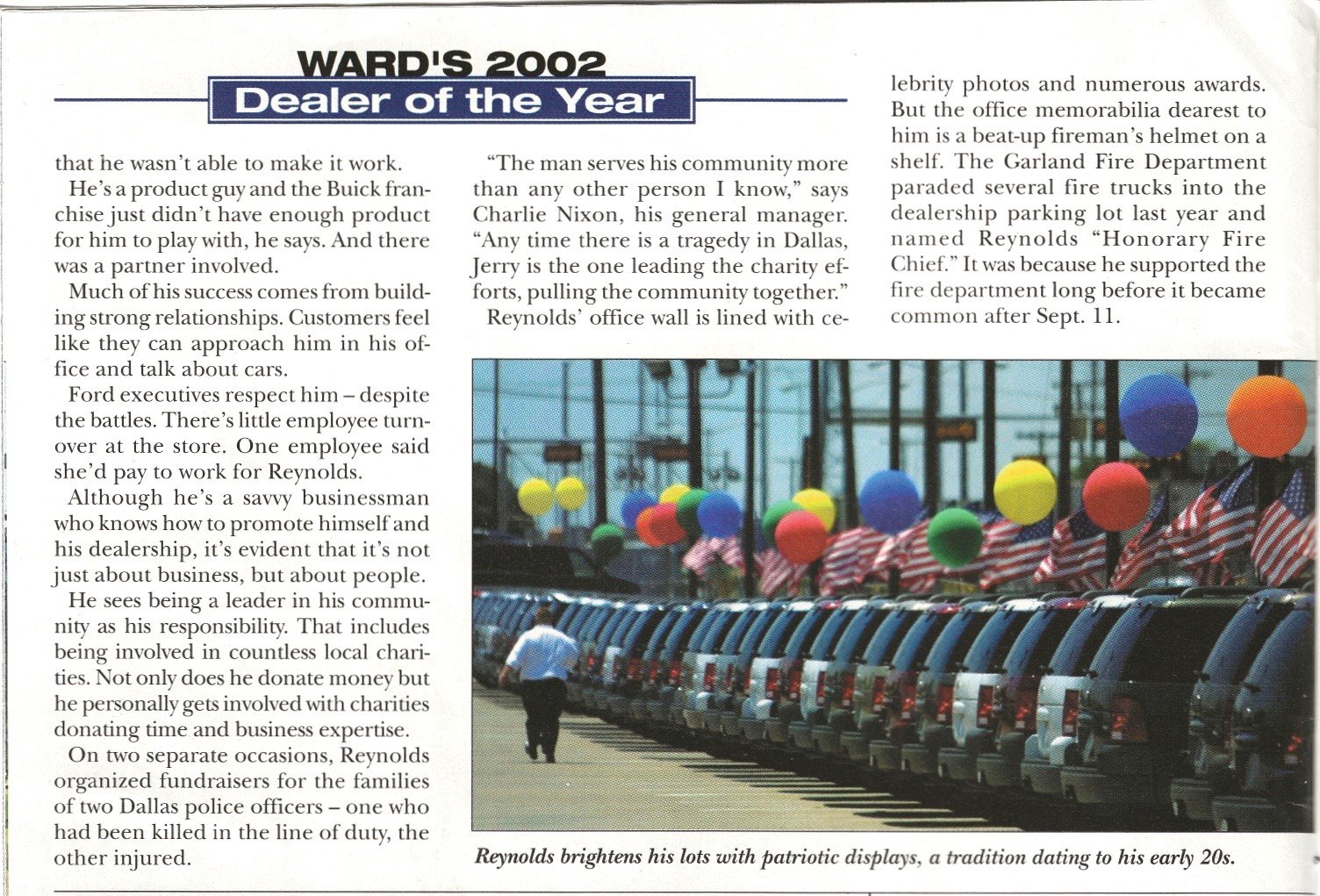 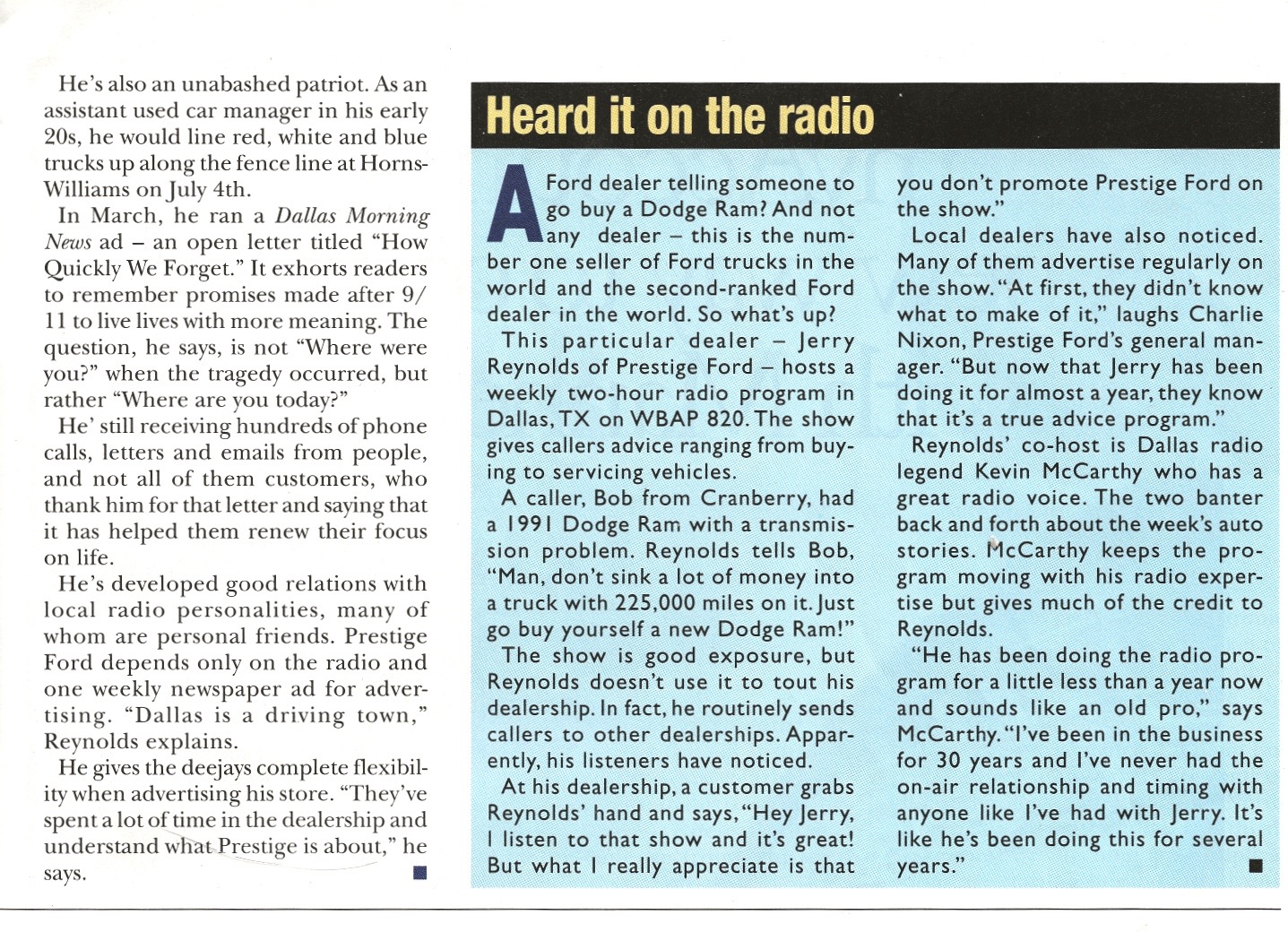