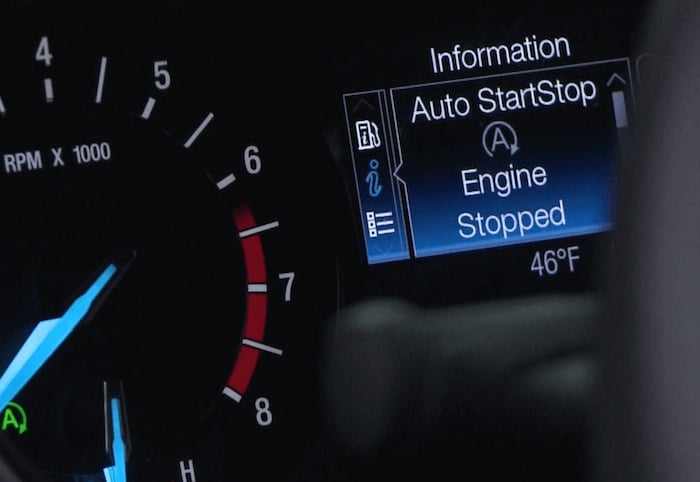 We had a caller on the CarProUSA radio show recently who described a problem he was having with his brand new car.  His engine shut off at lights, then shuddered before he took off.  I didn’t mean to laugh, but couldn’t help it.  He has the stop-start system like almost all cars do today but nobody at delivery explained it to him.

If you are not familiar with this system, simply put, when you come to a stop, like a red light, the engine shuts down, but essential other components continue to run, like the air conditioning system, power steering, brakes, sound system, etc.  When you take your foot off the brake to press the gas pedal the engine restarts and you go on your merry way.  In a vehicle with a manual transmission, the system operates from the clutch pedal instead of the brake.


Automakers and the engineering community say start/stop technology improves fuel economy by 5 to 10 percent, although I am not confident in their findings.  There would have to be some amount of gas savings while your vehicle is not idling, and there would be fewer emissions coming out of your tailpipe.

To put your mind at ease about the mechanics of the start/stop system, vehicles that have the system have heavy-duty starters, and they have larger batteries, which are essential since all the accessories are running strictly on the battery when the engine stops.


Although start/stop systems are fairly new to cars in the United States, it was Volkswagen who debuted it in Europe in 1983.  About 10 years ago, Mazda announced a similar system that did not engage and disengage the starter, but it never really came to fruition and proved to be unreliable.


So, what are the real-world driving characteristics of this technology?  I can tell you that for me, it drives me crazy, especially in heavy traffic.  I drive over 100 new cars per year, and for the past year or so, 99% of the vehicles I drive and review do have the start/stop system.  Some automakers, like Ford, have committed to putting it in every vehicle it produces.

One observation I have noticed is that the smaller the engine, the more seamless the feel of the engine turning on and off.  With larger engines, you tend to feel the system more.  I’ve been in cars where the engine noise going on and off is quite loud, and you actually strongly feel a vibration every time the engine cranks again. I always note in my car reviews when the system really bugs me.

Another downside I have experienced in some vehicles is when the outside temperature is high, the air conditioning system does not work nearly as well when the engine stops.  A long traffic light can make the interior temperature uncomfortable.  With some vehicles, when the outside temperature is hot, there is no difference in the air conditioner’s output, so if you are in a hot weather area, this is something you would want to pay attention to when test-driving.


Here is the good news:  almost every vehicle I drive that has start/stop also has a switch to turn the system off, but some GM SUVs recently did not have a way to disable it.  If you are like me and don’t like this technology, in most cases, you can turn it off.  The bad news is that in almost all cases, you have to disengage the system every time you start your vehicle.

Right now, with rising gas prices, this technology will save some people some money.  If it turns out that this technology causes starter failures at a greater rate, there will be no savings.  Only time will tell.


As I tell callers on the air, I wouldn’t let start/stop be a deal-breaker if the car you want has it, but be aware of it when car shopping and test-driving your next new vehicle.  If the car you are considering has the system, and you don’t like it, make sure it can be turned off.  Also, when test driving a vehicle, ask about the system because depending on the weather, it may not kick in on the test drive.  I’ve had many listeners who discovered they had the system days after buying.  I’ve even had listeners take their vehicles into service, thinking something was wrong.

Good news for my fellow haters of this system: Some automakers are shipping vehicles without the chip that runs start/stop. You even get a $50 credit.

This story was updated with information on August 30, 2021. Photo Credit: Ford