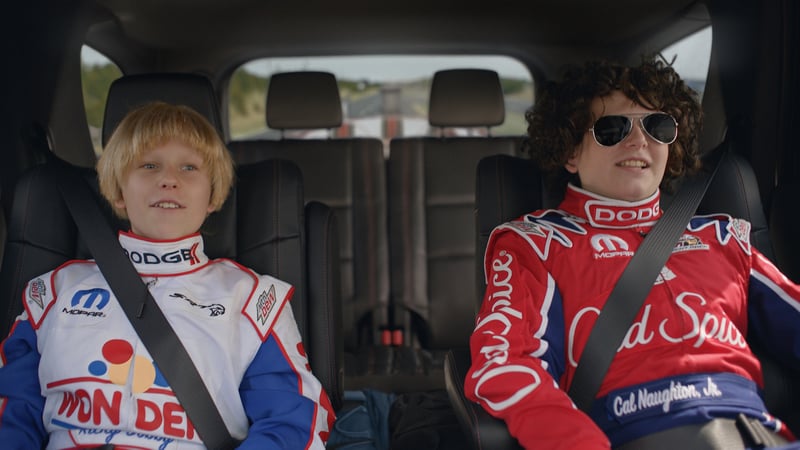 Dodge is celebrating this month's 15th anniversary of the flick“Talladega Nights: The Ballad of Ricky Bobby” with a new ad spot.  It's a follow up to the brand's hit 2020 “Family Motto” initiative. The new 30-second commercial is dubbed  “Life Lessons”.

Set in Talladega in 1982 (if 1982 had a Dodge Durango), the spot features Gary Cole reprising his role as Reese Bobby, who uses the road as his classroom as he drives son Ricky Bobby and his pal Cal Naughton Jr. to school. They do so in style in a Dodge Durango R/T Blacktop Tow N Go that's Granite with Dual Carbon Stripes.

In the spot Reese tosses words of wisdom (and semi-legal fireworks!) toward the boys, including “Life takes 50% bravery and 60% stupidity;” “Take it from your daddy. Just because you grow up, doesn’t mean you need to give up” and “The most powerful force in the universe is love. Ha, ha, ha, no, it’s not! It’s hot, nasty, badass speed!”

“Given the incredible response to the ‘Family Motto’ campaign from the Dodge brand last year, we wanted to follow it up with the all-new ‘Life Lessons’ campaign,” said Olivier Francois, Global Chief Marketing Officer, Stellantis. “As with our first spot, we wanted ‘Life Lessons’ to stay authentic to both the Dodge brand and to the original film. We were able to accomplish this endeavor with Sony Pictures as it marks the 15th anniversary of the original film, in addition to an amazing roster of creative allies, including Sony Music and AC/DC, Applebee’s, Wonder Bread, Old Spice and Mountain Dew.”

“One of the ‘Life Lessons’ for those of us at Dodge is always striving to give enthusiasts what they ask for, so in addition to giving them more from ‘Talladega Nights: The Ballad of Ricky Bobby,’ last year we launched three 700-plus-horsepower muscle cars with the new Challenger SRT Super Stock, Durango SRT Hellcat and Charger SRT Hellcat Redeye,” said Tim Kuniskis, Dodge Brand Chief Executive Officer, Stellantis. “Together, these vehicles comprise Dodge, the automotive industry’s most powerful brand. Lesson learned.”

You can check out the first commercial, "Family Motto", below.