Toyota & BMW The Most Shopped Brands In Q2 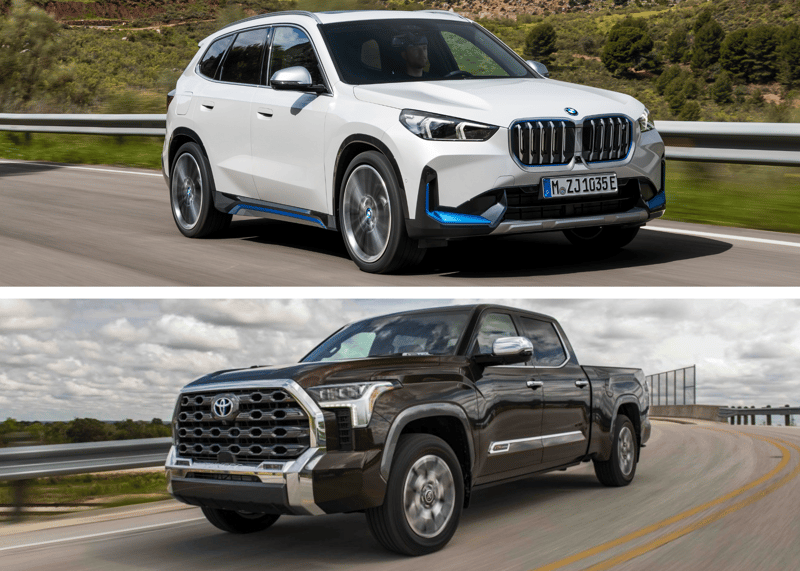 It's been an unusual, unpredictable year for the car industry to say the least.  Here's how the second quarter looked according to the 2022 Kelley Blue Book Brand Watch report. Overall, car shopping gained more strength in both the luxury and non-luxury segments, despite high gas prices.  KBB also says interest in electric vehicles rebounded after declining in Q1. As for most popular brands, no big shakeup to report.  BMW and Toyota held their spots as America's most-shopped brands.


Kelley Blue Book Brand Watch is a consumer perception survey made up of people intending to buy a new vehicle within 12 months. It also looks at shopping behavior to determine which brands and models are the most-shopped. Something new for the latest report - KBB says it surveyed both mobile and desktop users to provide an even broader view of vehicle shopping. Before this, the survey included results only from desktop users.

"The record-high gas prices Americans experienced in the second quarter of this year undoubtedly affected their vehicle purchase considerations," said Vanessa Ton, senior research and market intelligence manager at Cox Automotive. "When you couple that with ongoing new-vehicle supply shortages and resulting sky-high transaction prices, it's no wonder people are viewing their car shopping more through the lens of affordability and giving increased consideration to the fuel efficiency benefits of traditional cars and electrified vehicles."


Thanks to record high gas prices in mid-June, KBB says there was more interest in sedans in Q2 as shoppers considered more efficient, and affordable sedans like the Honda Accord, Civic and Toyota Camry. Researchers say a notable 40% of non-luxury shoppers considered cars in the second quarter. That's up from 37% in Q1 2022 when gas prices started to take off, and up significantly from 33% one year ago in Q2 2021.  KBB says even on the luxury side, fuel efficiency increased in importance, climbing quarter-over-quarter to No. 6 in the factors most important to shoppers. In terms of supply issues, KBB says supply was better luxury shoppers than it was for non-luxury ones in Q2.

KBB attributes high gas prices to a boosting interest in electrified vehicles as well.  Researchers say interest rebounded after declining in Q1 and returned almost to record levels, There was also more selection of vehicles. Of all shoppers:

The top 10 most-shopped electrified vehicles included six hybrids and four EVs. The segment breakdown included four SUVs, four cars and two trucks. Toyota and Tesla each had three models on the list, while Honda and Ford each had two.


BMW, Cadillac and Lexus were the top three most shopped luxury brands in Q2 2022. BMW retained its top spot, a position it occupied for three years until the end of 2021 when Lexus briefly overtook the top spot. BMW's strength in Q2 came from increased shopping for its cars.

Cadillac pulled marginally ahead of Lexus for the second most-shopped luxury brand, and the Cadillac Escalade was the most-shopped luxury vehicle for the second consecutive quarter. Also coming into play,  Cadillac benefited from healthy inventory in Q2 while Lexus continued to suffer supply issues.  KBB also says there was increased interest in Cadillac in Q2, stemming from the launch of its first EV, the Cadillac Lyriq. Cadillac also unveiled its upcoming Cadillac Celestiq EV.

Of new EV startups, Rivian is surpassing Lucid and Polestar.  KBB says Rivian doubling its shopping consideration from Q1 to Q2 2022. While only 2% of luxury shoppers considered the brand that only started selling vehicles last year, Rivian had the same percentage of shoppers as Alfa Romeo, a longtime established luxury brand. KBB also says Rivian also has attracted attention on the list of factors important to luxury shoppers, ranking second to Tesla in fuel efficiency and second to Land Rover in ruggedness.

On the flip side, Mercedes-Benz struggled to keep shopper interest in Q2, suffering a two-percentage-point decline in shopping in Q2,  the most significant drop of any luxury brand. But even with the decline, Mercedes still beat BMW in sales thanks to having more inventory available.

Despite ranking fifth in shopping for Q2, Tesla was the top-selling luxury brand again in the U.S., and the Tesla Model 3 remained the most-shopped luxury car.


Toyota, Ford and Chevrolet were the top three non-luxury brands among car shoppers in the second quarter. Toyota kept its top spot as the most-shopped non-luxury brand, with 35% of all non-luxury shoppers considering a Toyota in Q2 2022. Toyota held its top position for four years until Ford's brief occupation as No. 1 in the final quarter of 2021. However, Toyota quickly grabbed it back in Q1 2022 and widened the gap in Q2, with Ford coming in second place. Chevrolet is just one percentage point behind Ford, taking the third spot.

KBB says Honda's Accord and Civic, along with the Toyota Camry, all remained on the most-shopped list for the second consecutive quarter – this after no traditional cars were among the top 10 most-shopped vehicles in the final quarter of 2021.

Click on the links below for specific KBB reports: