More People Killed In Urban Accidents Than Rural Ones If you thought rural roads were the most dangerous places for drivers, think again.  According to new AAA Foundation for Traffic Safety research,  more people are now killed on the nation’s city streets than on rural roads, with speed the critical factor.

According to AAA, traffic deaths in urban areas increased 34% from 2010 and 2019 and nearly half of these fatalities occurred on roads with speed limits of 35 mph or lower, and about one in five were in angle collisions.  On the other hand, fatalities dipped 10% in rural areas.

AAA says urban fatalities surpassed those in rural areas in 2016. By 2019,  19,595 people were killed in urban locations compared to 16,340 in the countryside. AAA researchers say we can expect this upward trend to continue with urban population increases and more vehicle miles traveled in urban areas.

“Many urban streets in metropolitan areas are busier, with a mix of road users such as drivers, pedestrians, and bicyclists,” said Dr. David Yang, executive director of the AAA Foundation for Traffic Safety. “Add in speed, and these locations grow more dangerous. When navigating urban streets, every user needs to be careful, pay attention to road conditions and follow traffic laws.”

AAA calls the recent change notable, citing data from the  Federal Highway Administration statistics showing that more than 70% of the 4 million miles of public-access roads in the United States are rural. Yet while speeding occurs on all roads, urban roads and streets account for a disproportionate number of speeding-related fatalities. The AAA Foundation study examines characteristics of deaths that happened on urban non-limited access roadways (not freeways, expressways, or interstates) from 2010 to 2019. You can find details of the Foundation research here, but key highlights include: 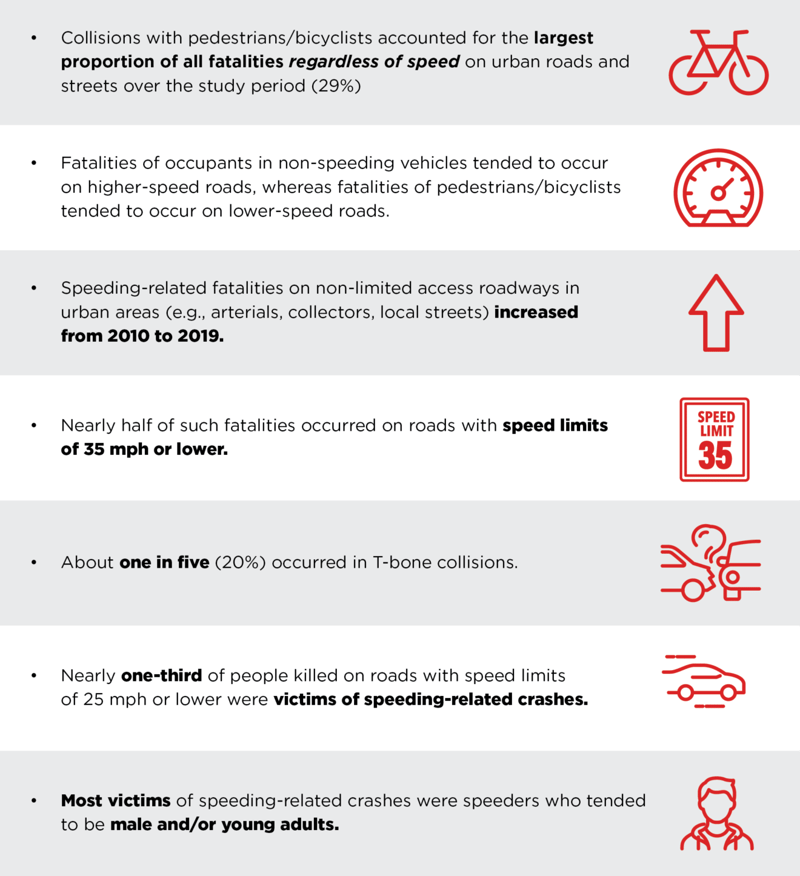 As we've previously reported, traffic deaths are up nationwide, up 7% in the first quarter of this year over last according to NHTSA estimates.  This would mark the highest number of first-quarter fatalities since 2002.

Last year, speed-related crash fatalities were up 5%.  AAA is urging transportation engineers and decision-makers to consider speed management and prioritize safety when setting speed limits. Researchers say it's  critical for urban roads and streets where vehicles and vulnerable road users mix. AAA says it strongly supports adopting The Safe System Approach (SSA) to roadway safety. The SSA uses current effective countermeasures to create multiple layers of protection for transportation network users, rather than responding only after evidence of a specific safety problem.