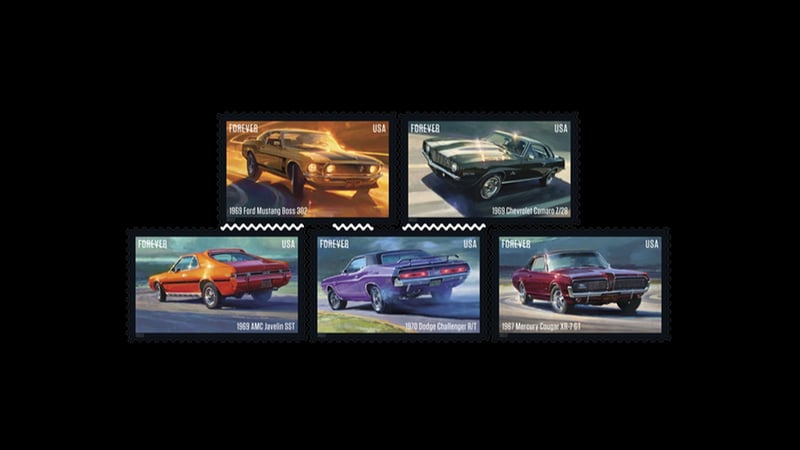 If you're a fan of muscle cars of the 60's and 70s, this might interest you, stamp collector or not. The U.S. Postal Service is giving a nod to the pony car era with a new Pony Cars Forever collection. The collection consists of five stamps featuring some of the most famous muscle cars on the road, cars like the Dodge Challenger R/T, Ford Mustang Boss and Chevrolet Camaro.

In its press release, the USPS notes that the history of muscle cars started back in the 1960s and over the past six decades, fast and fun pony cars have become a uniquely American obsession, bringing a "youthful spirit to the automotive world." The USPS says drivers in the mid-to-late 20th century craved sporty and affordable cars - not the ones that were in their parents garages.

U.S. automakers began catering to the younger driver segment and while several manufacturers initially produced models that fit that description, the pony car trend began in earnest until 1964. In the 70's the energy crises changed things and interest declined for a bit - but later had a resurgence appearing in many movies and TV shows.   While interest ebbs and flows, the USPS says many models have been reintroduced first launched during the heyday of the mid-60s and many adventurous drivers and those young-at-heart still enjoy them today.

The first-day-of-issue event for the Pony Cars Forever stamp will be held at the Great American Stamp Show in partnership with the American Philatelic Society in August.

If you'd like to purchase the stamps you can do so at the USPS Postal Store or call 844-737-7826.  The USPS says it relies on the sale of postage stamps and products to fund operations since it generally receives no tax dollars for operating expenses.