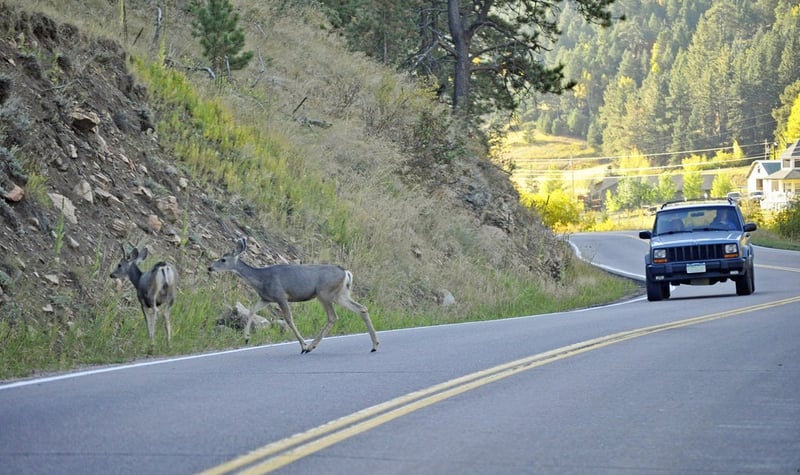 Vehicle and animal collisions are on the rise nationally, according to a new study from State Farm. Stats show that drivers struck more than 2 million animals during the pandemic, an increase of 7.2 percent.  Collisions with deer top the list of animal involved vehicle crashes.

The study serves as an important reminder as we head into fall.  While historically November is the most dangerous month for animal collision,  it's already peak season for wildlife collisions in some areas like Kentucky, where last week Kentucky transportation officials issued an Antler Alert to warn drivers of the dangers.

“Shorter days and cooler nights, October through December, bring a noticeable increase in highway collisions involving deer,” KYTC Secretary Jim Gray said in a press release. “Drivers should be vigilant at all times, but the autumn presents a special challenge for drivers, with deer and other wildlife increasingly on the move, often at night.”


The new State Farm study documenting the 7.2% increase  looks at the 12-month period between July of 2020 and June of 2021.  November remains the most dangerous month, followed by October and December, in that order, just like in the previous 12-month period. Based on claims data, State Farm researchers say animal vehicle crashes are most likely to occur in these five states. Both Texas and California make the list.

There's another way to look at things as well and and that's the likelihood that drivers have of hitting an animal. State Farm says the numbers here render different ranking.  West Virginia leads the nation in this type of risk (1 in 37 chance); followed by Montana, where the chances of hitting an animal (1 in 39) grew 17% since the previous period; South Dakota (1 in 48); and Michigan and Pennsylvania (both, with 1 in 54 chance).

State Farm says compare that to the District of Columbia, where it is estimated that less than 1,000 animal collisions took place during the recent 12-month period observed, and where drivers have a much lower probability of 1 in 569 of hitting an animal.

Striking an animal on the roadway is dangerous. Many times animal collisions end up in road kills, and often in injuries or even the deaths of drivers and passengers.

“Because many times an animal collision results in that animal’s death, this type of accident is particularly unsettling for drivers,” says Kimberly Sterling, Operations Vice President P&C Claims at State Farm. “Scanning the road while we drive, as well as slowing down, is very important, not only when driving close to wildlife, in rural areas for example, but also in our own residential neighborhoods, where pets abound.”

Vehicle damage can vary depending on a number of factors including speed and the size of the animal hit.  State Farm says its claims database includes chickens, alligators, bats, cows, pigs, armadillos, bears, donkeys, eagles, horses, coyotes, owls, cats and dogs, and the list goes on. An “unidentified animals” category encompasses animals driver's weren't able to identify.  One thing is clear however, and that nationwide, in the recent 12-month period observed, more than half of the time the animal being hit was a deer (an estimated 1.4 million), followed by “unidentified animals” (189,715), rodents (110,976), dogs (92,924) and raccoons (58,020).

For the calculation of the industry claim estimates, State Farm says it took into account the number of animal collisions claims received, the company's market penetration (proprietary), and the number of licensed drivers in each state.

How To Prevent Animal Collisions


These 10 tips provided by State Farm on its website could help you reduce the odds of hitting an animal with your motor vehicle:

If you end up hitting an animal, make sure you and any passengers are ok. State Farm advises you to call 911 if the animal is large and still there after you hit it, but don't ever approach it. Once it’s safe to do so, you'll want to check if your vehicle is drivable, take pictures of the damage and, if needed, file a claim.